Happy Sunday!! Once again I am sharing some of the cards I created for World Card Making day yesterday. I rarely have chunks of time like I did yesterday and I created seven cards, which is a lot for me!!  I played along with the Winnie and Walter blog. It was so much fun!

I actually was disappointed yesterday that there were not more challenges at places. There were chances to win by commenting but not a ton of public places for challenges that I saw. I am probably just viewing the wrong places, though.

The first card I am sharing was a Pinspiration Challenge by Vanessa. She picked the image below and we had to create a card inspired by that image. 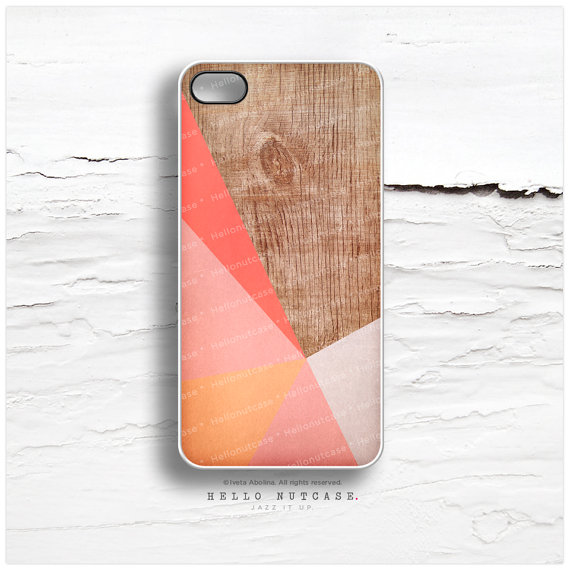 I will be honest, at first I thought this was going to be rough. Then I looked through my patterned paper and had an a ha moment. Below is what I came up with. 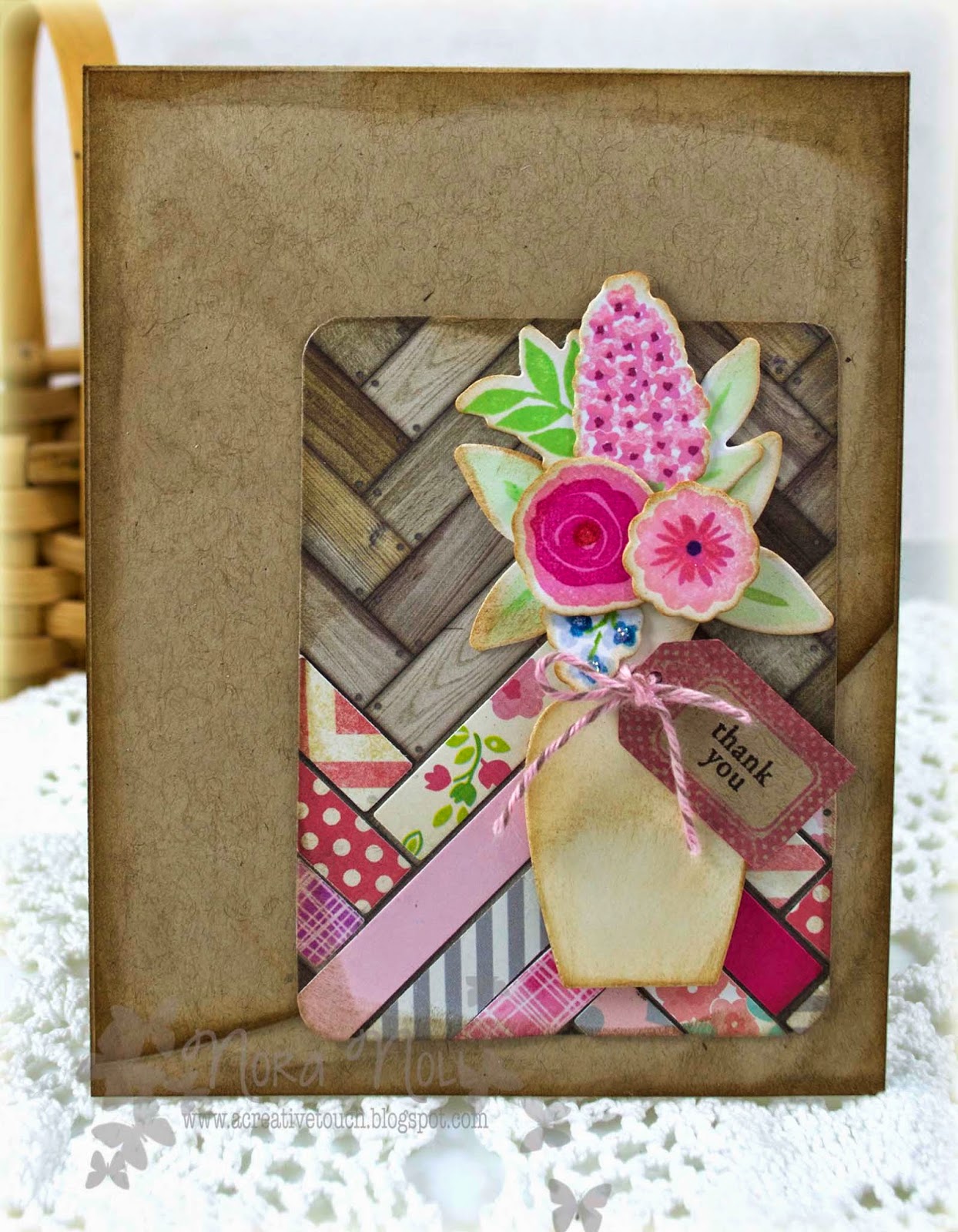 My inspiration for the whole card was the wood paper. I was inspired to use the wood paper by the image above. I also used pinks in a geometric pattern, which was also inspired by both the paper and the photo. This card was so fun to make!!

I started by die cutting and inking the kraft paper. I then die cut the wood patterned paper into a rounded rectangle and adhered it over the card base. Next, I die cut strips of paper and overlaid onto the wood. 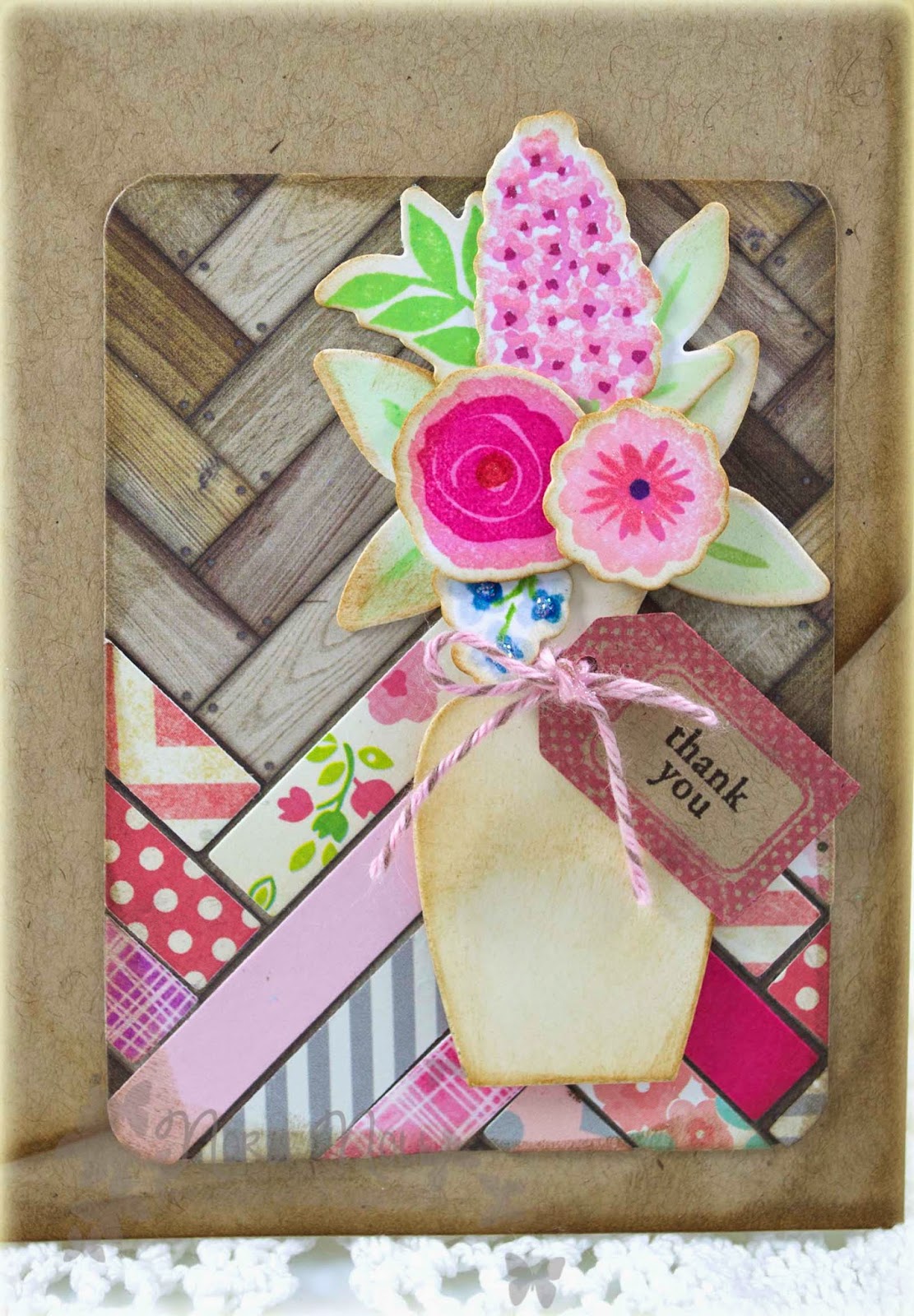 Once I got that far, I was kind of stumped. I dug through a bunch of stamped images that I have lying around and had another a ha moment. I decided to use a vase of flowers over the wood paper as the focal point. The colors were perfect after I inked them up a little to tone the white of the paper down. 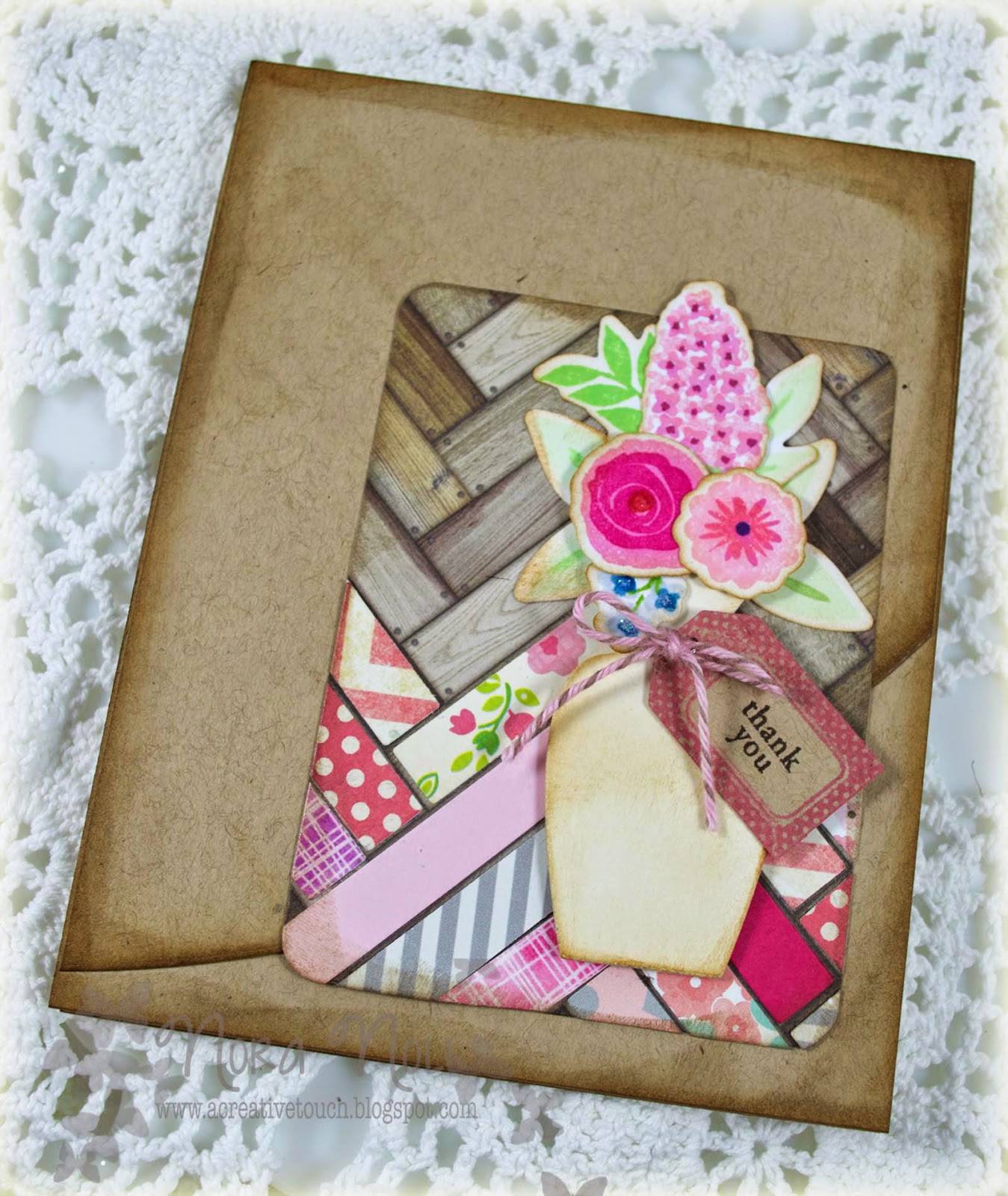 I know that the inked look is not for everyone but I like how this card came out.

The third challenge was a color challenge. I thought it would be a cinch but I ran in to a few glitches. Well, it was really my fault. I looked at it quick and walked away for lunch. When I came back, I did not look at the colors but thought the challenge was to use blush, pink and gold. I had my first card almost done when I looked back and noticed it was not pink but PEACH. I was so mad at myself!! 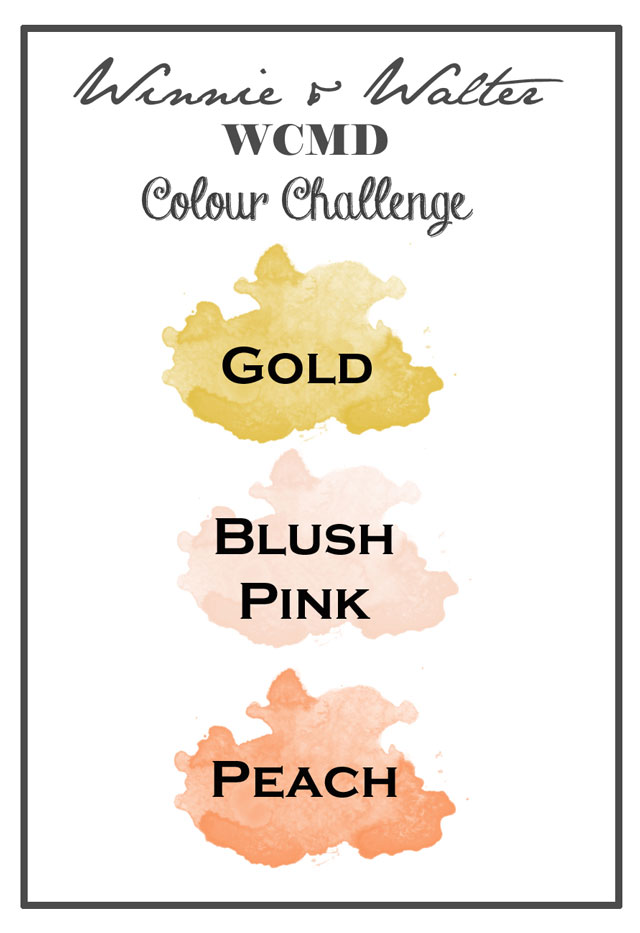 So I had to figure something out to save the card so I could enter the challenge. 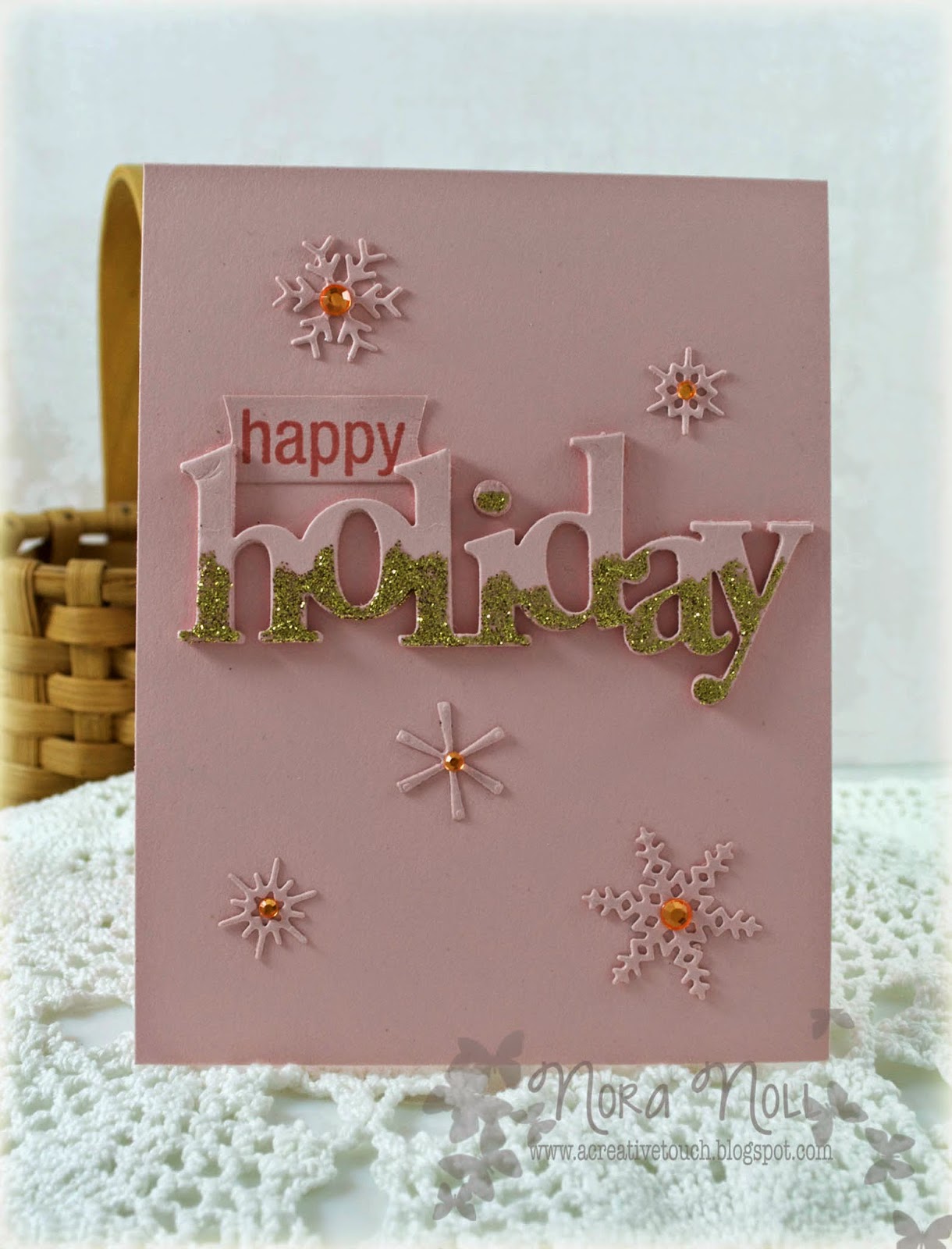 See the banner? That was a cover up of the pink. I actually tried to stamp over the original happy in versa mark and emboss in gold but it look HORRIBLE. I had to figure out something else. The banner was perfect. However, I had to tuck it under the die cut word, which was already glued down with glossy accents. That is why you see the little crease in the h.

I knew I wanted this card to be clean and simple. I die cut the word happy six times out of blush card stock and glued five layers together. The snow flakes were die cut from the same color while the sentiment dried. I then stamped the word happy in PINK and adhered "holiday" to the card. When I found out it was supposed to be peach, I substituted the banner. Of course, I don't own peach so I used a melon ink instead. 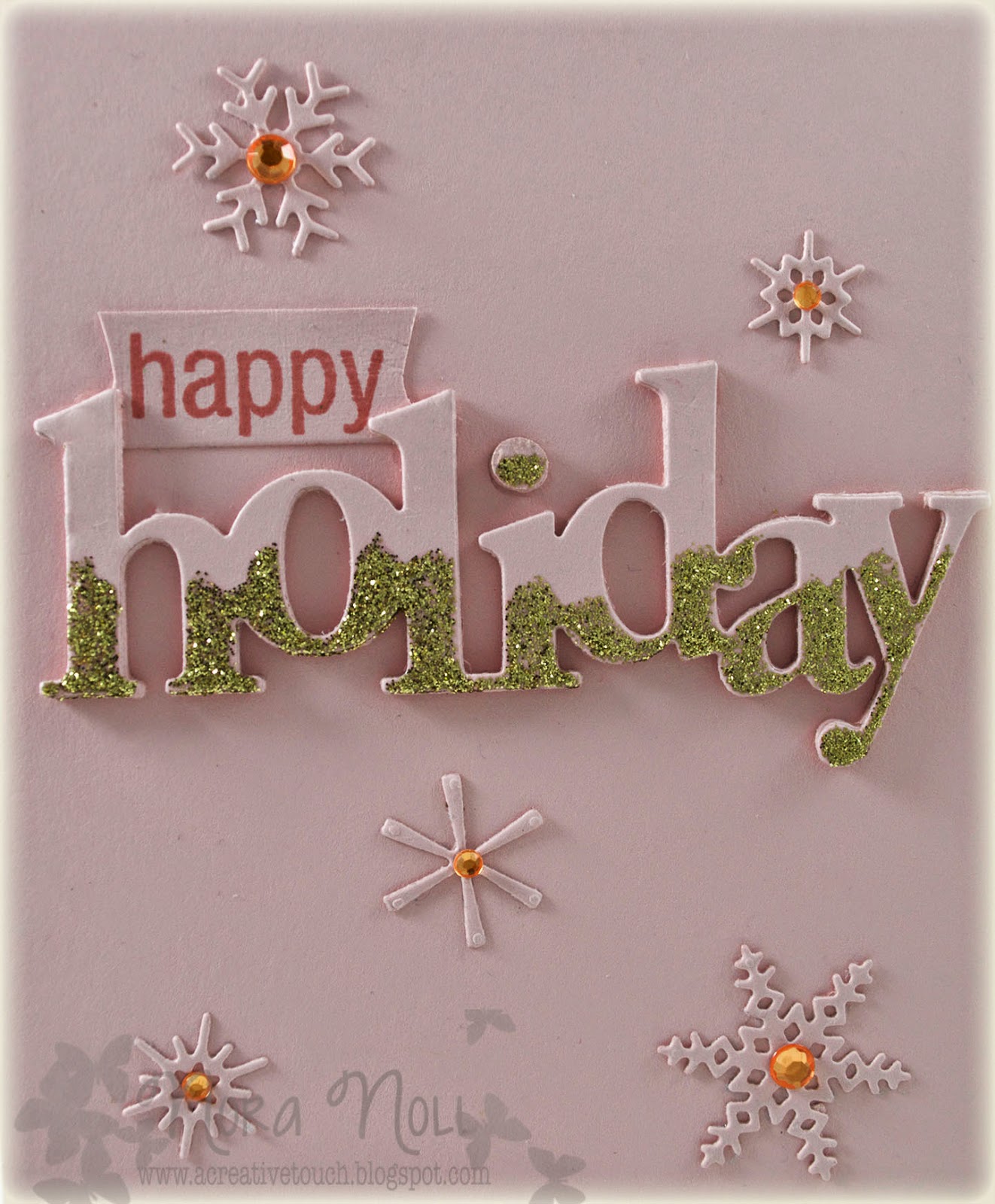 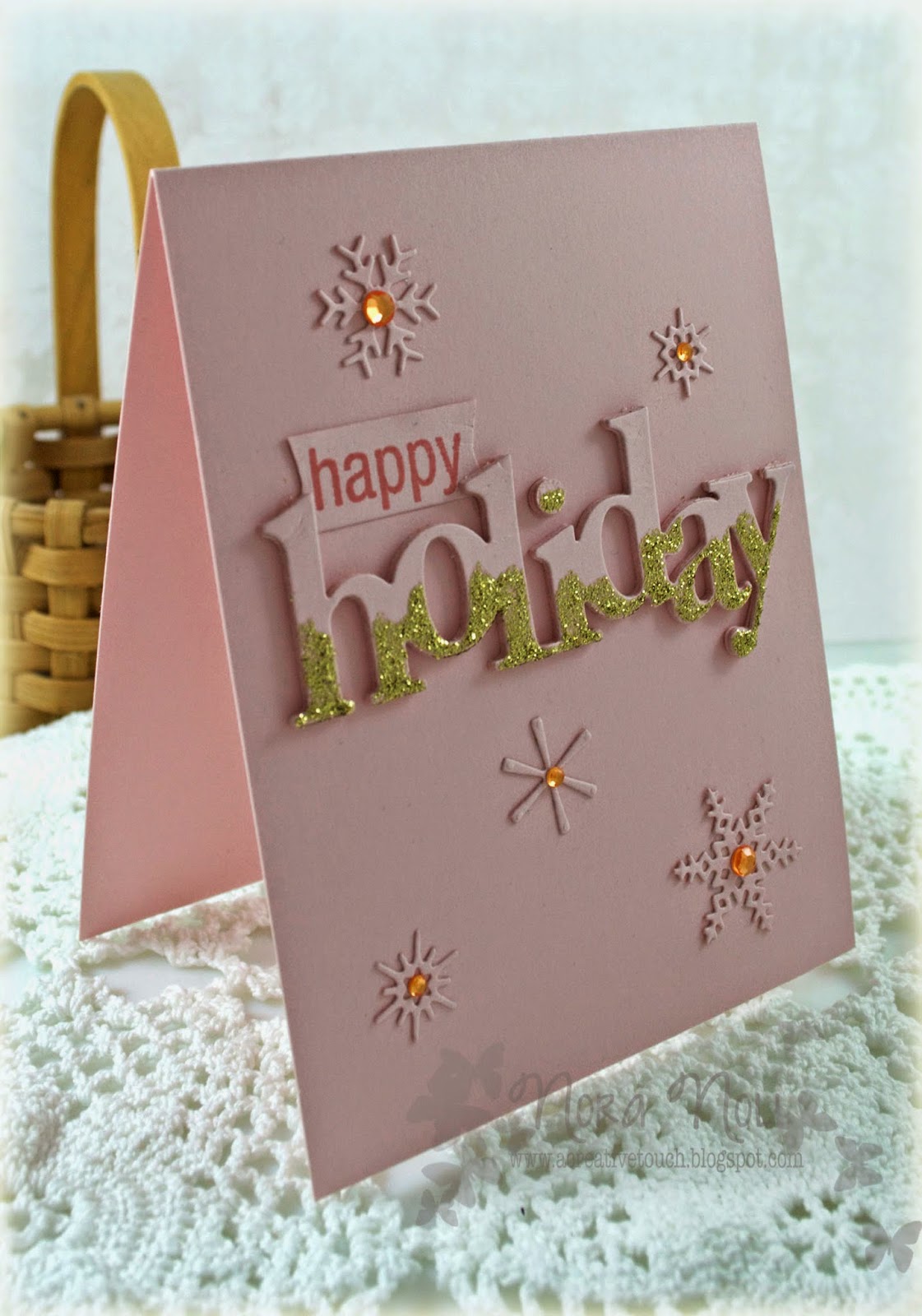 The last step was to use gold Stickles on the bottom half of the die cut sentiment. I am going to actually put a little more on as the glitter area shrunk as it dried. 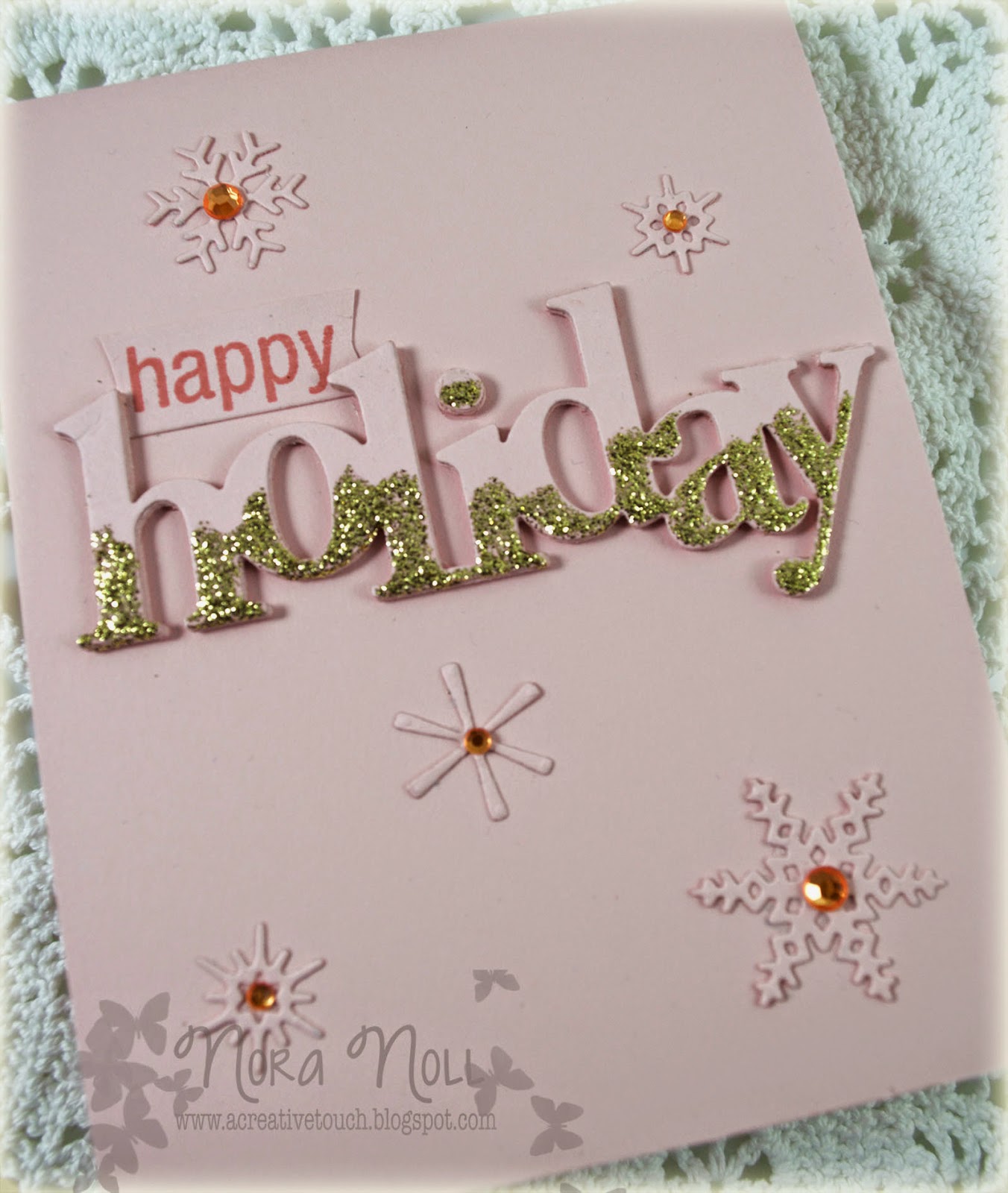 It is different, I will give it that.

I also made a second card as I had enough die cuts to make two. On the second one, though, I did not layer the sentiment die cut and stamped the word happy directly onto the card stock. 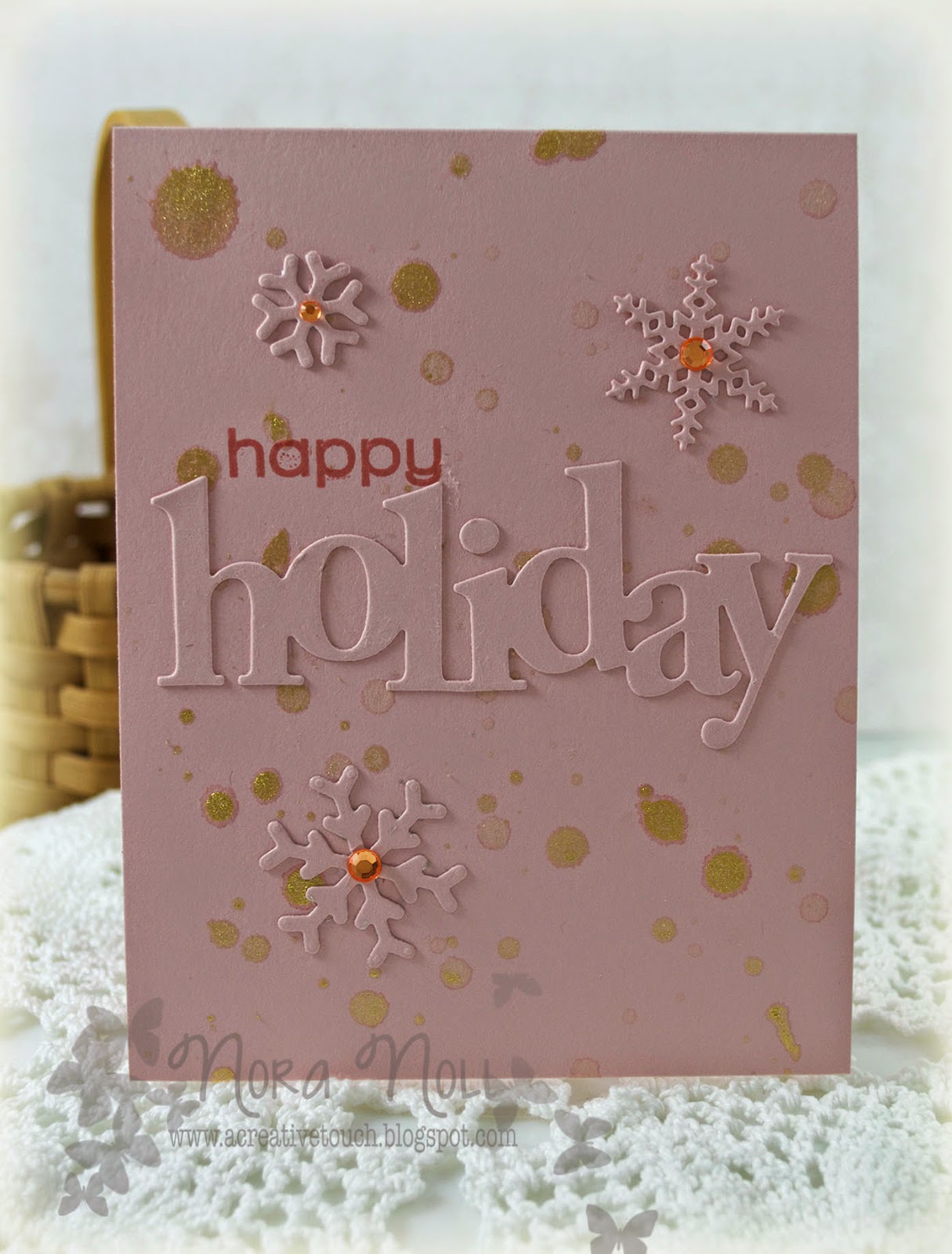 Instead of the gold being on the sentiment, I splattered gold mist onto the background. I then adhered all the die cuts. 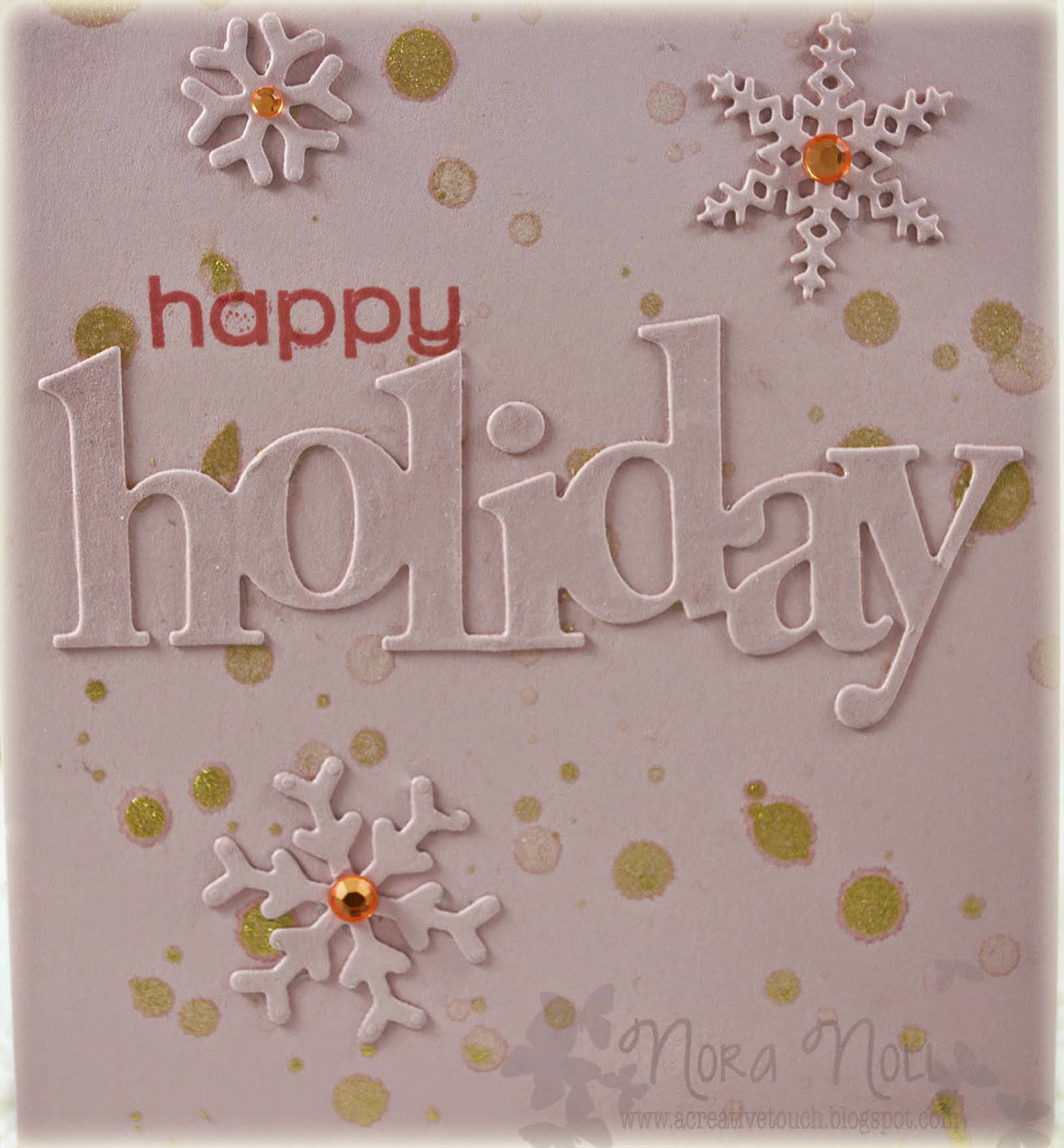 I then added some clear Wink of Stella onto the die cut and dried it with a heat gun. 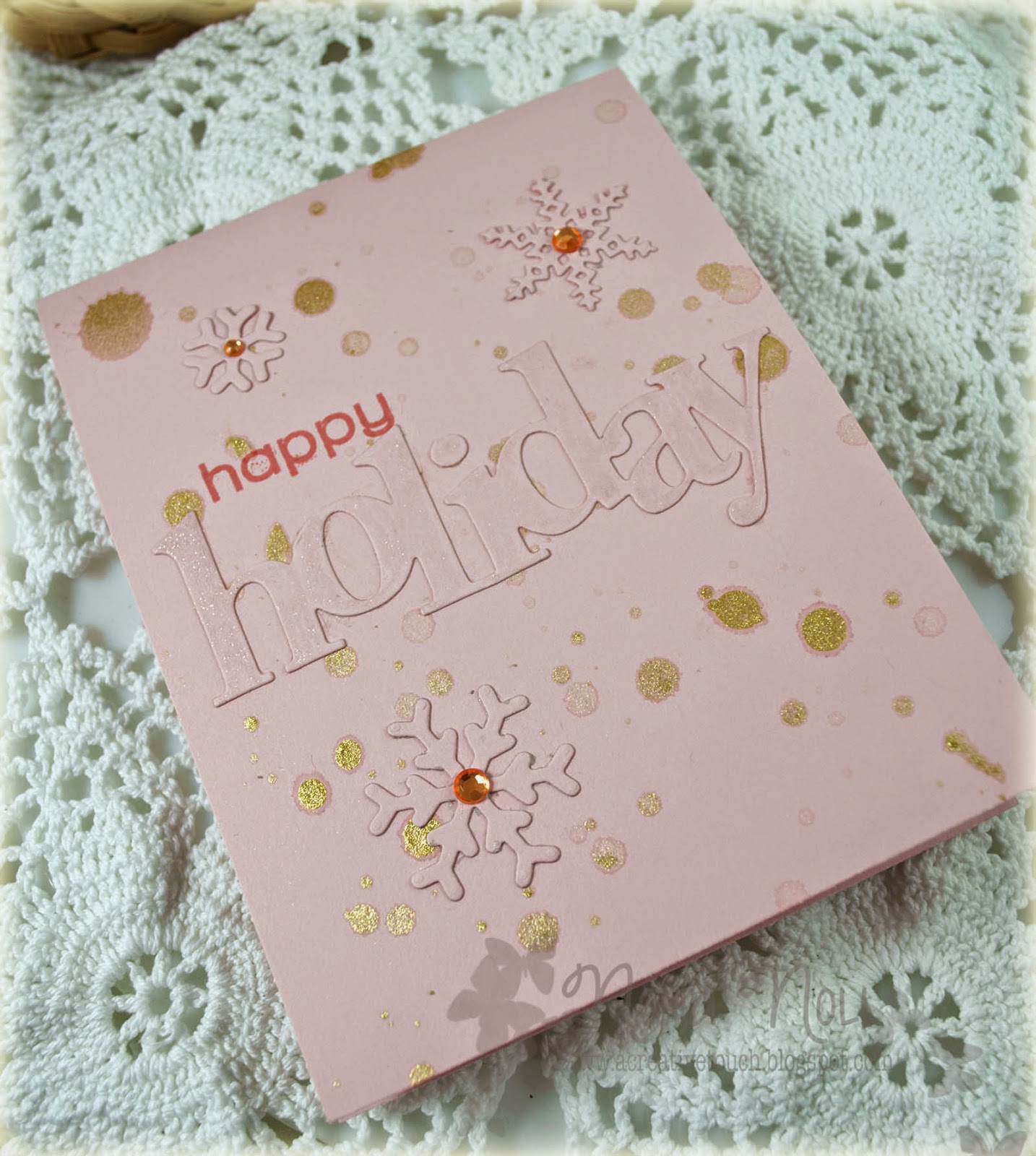 I have to admit that I do not like this card as well as the first but that is OK. It isn't horrible, just not my favorite. This color challenge wound up being way more difficult then I thought it would be!!

I am going to enter these cards into this months Virginia's View Challenge. The challenge is to make a clean and simple card. 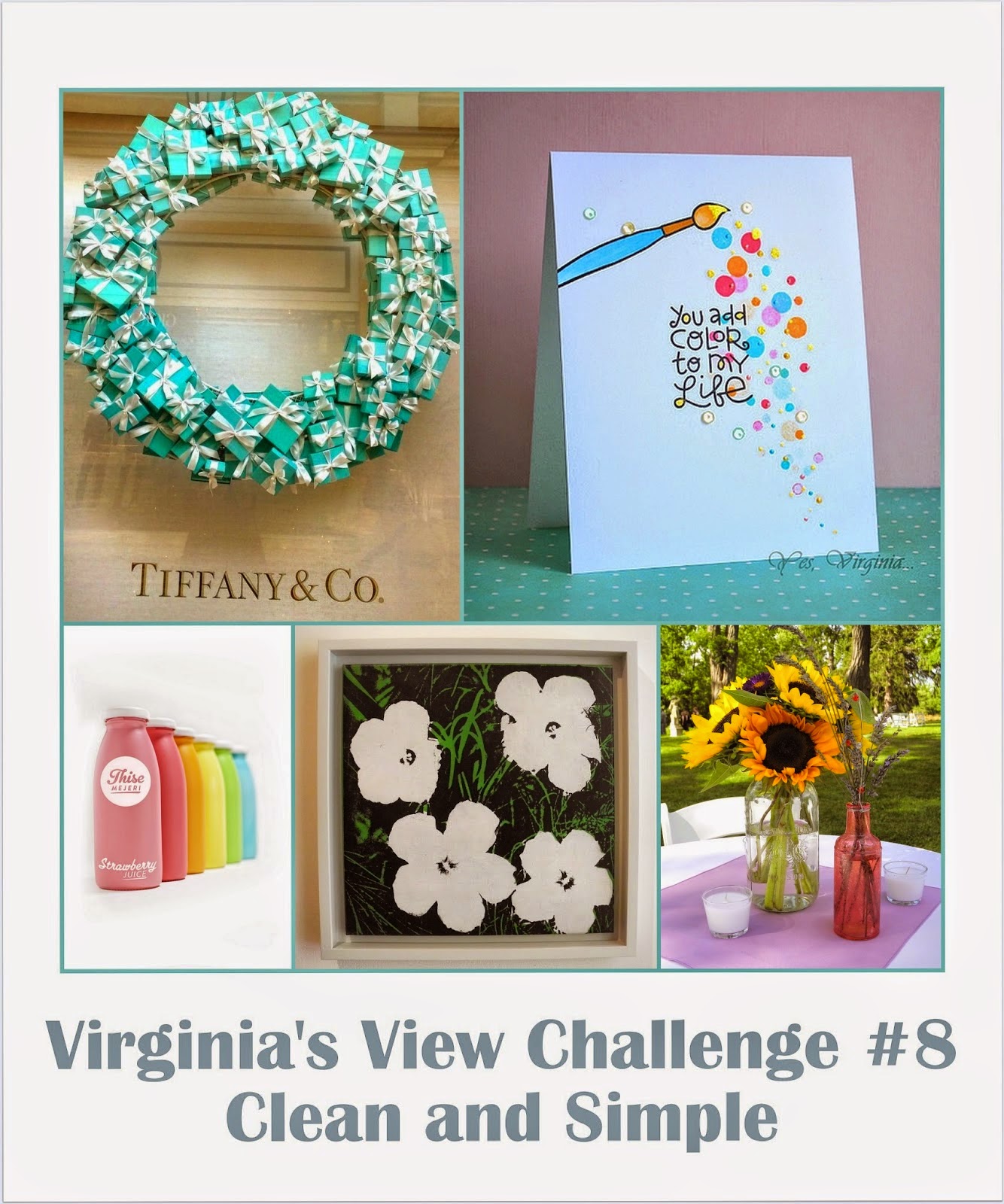 For my last tidbit of the day, I will show you my the last two color sheets for my Copic marker class. Day 6 was all about coloring animals with different colors and textures. I actually had the most fun doing this homework. 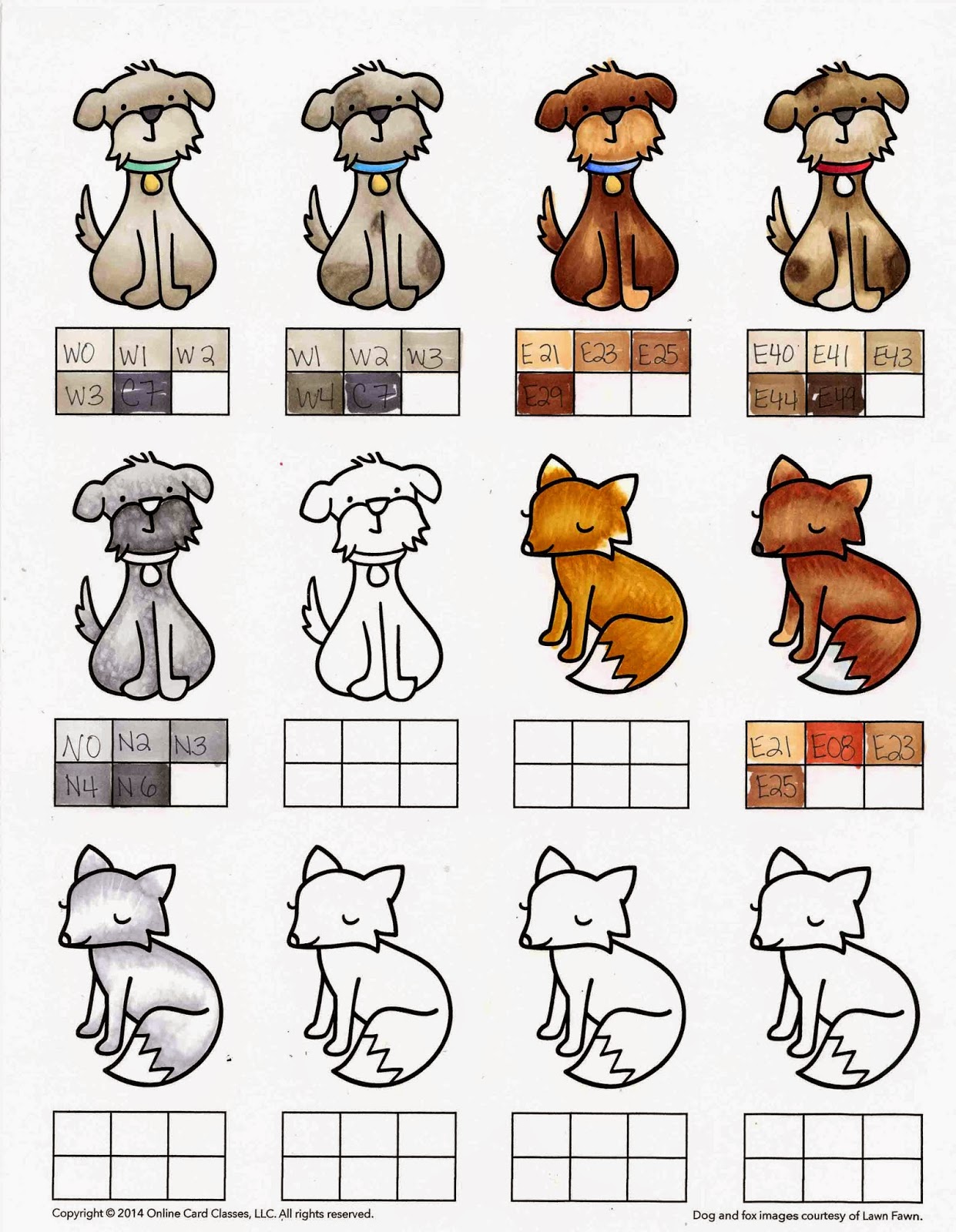 My doggies are my favorite!! I like the fox but had a hard time with getting the right shades.

Day #7 of the class was the use of difficult colors. They are not lying about this!! I only colored one image on this practice sheet and it is HORRID. 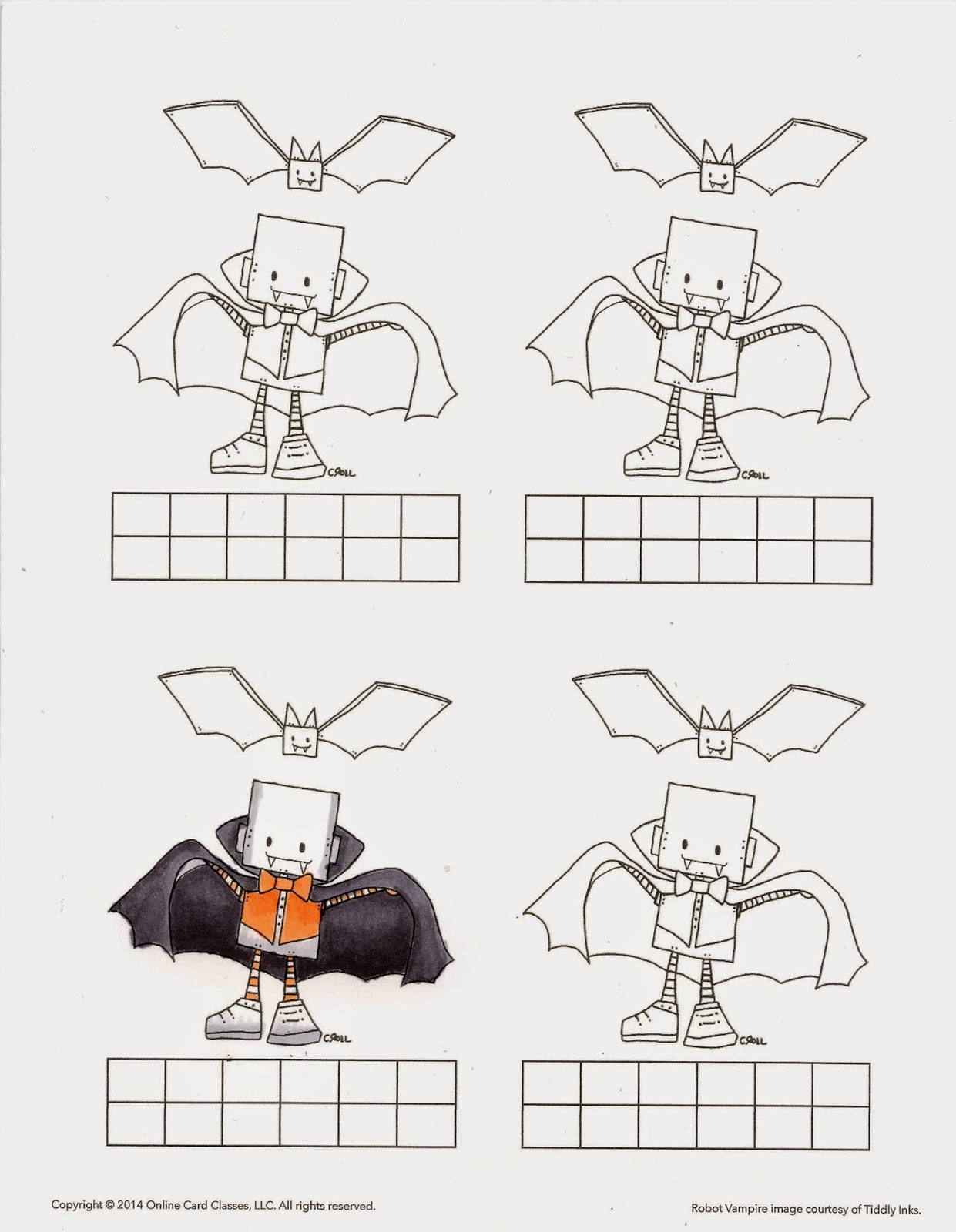 I should not really get that down on myself as part of the reason it is so bad is that I did not have the right colored dark markers. I have about ten on my list that I want for Christmas, as well as about ten refills of my most used colors. Quite an expense!!!

That is all for now. I hope to post my mason jar I created for Paper Trey Ink's "Make it Monday" challenge later. I still have a bit to do on it, though.

Thank you for stopping by.