It is Sunday here in blog land. I will be going over my sister's shortly to say good bye to my brother. He was here for Thanksgiving and to attend a wedding. I was able to have lunch with him on Saturday and it was nice to talk to him. I am sad he lives so far away.

I also did a little shopping at Michael's yesterday. What great sales they had!! I was only in there for a  about ten minutes and wish I had a bit more time to browse but Chris was waiting for me in the car. He is pretty good about letting me look around but we were on a time deadline and had to be home so I could be on time for lunch. I did get adhesive which was 40% off. That almost NEVER goes on sale so I bought quite a bit. They also had a coupon to get 25% sale AND clearance items. I bought a few Heidi Swapp stencils that were on clearance, as well as some ribbon.

Today I am sharing two cards that I created with Stampin Up!'s "Holiday Home" stamp set. I borrowed this set from my friend this weekend and think I am going to have to borrow it again another day. I LOVE it.

The first card I created for my friend who just moved into her new house on Friday. This card was a total CASE of a card I saw somewhere on the web. I know I pinned it but I have pinned so many darn cards that I couldn't find it to link up. Anyway, I stamped three houses in gray on a white card base and a street light image in black. I then die cut the white panel and mounted it on a red hot card stock base. 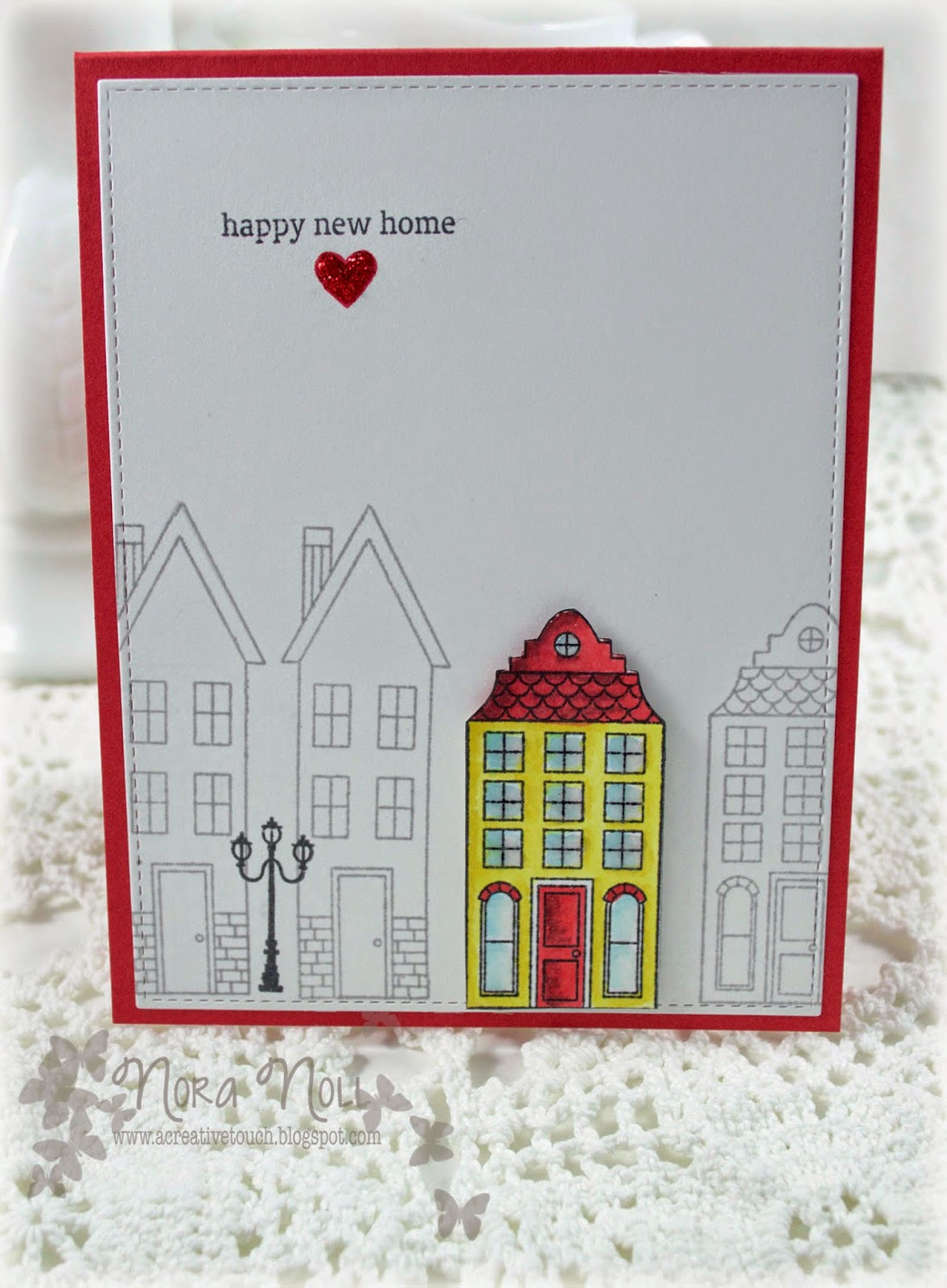 Next I stamped a fourth house in black, colored it in with Copic markers and then die cut it out. I colored it in yellow because my friend's new house is yellow. Hmm...I just noticed that this house should have been on the opposite card! I meant to put a different house on this one! Ugh!!! 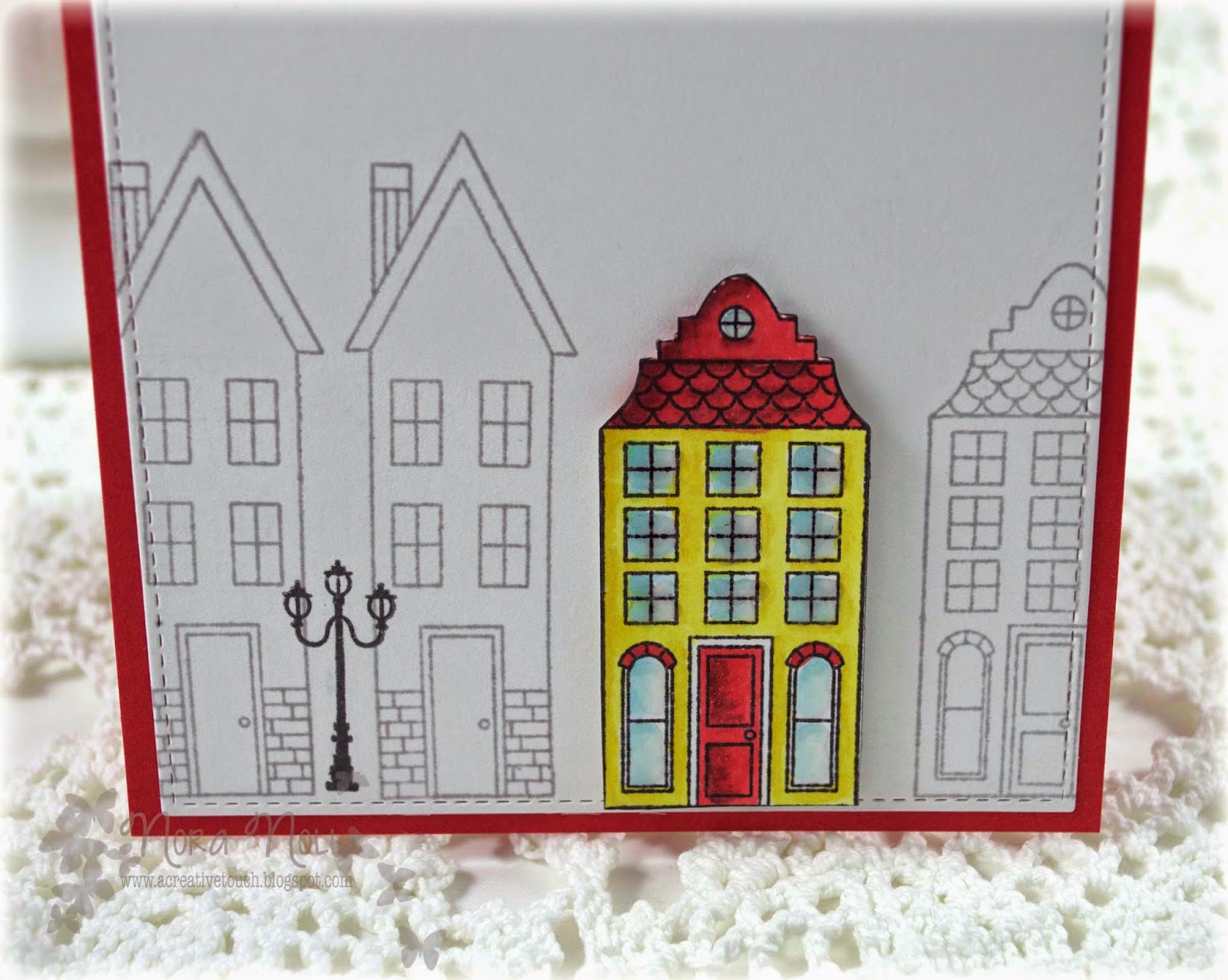 I mounted the yellow house onto the card with foam adhesive and used Ranger Glossy Accents on the windows to make them reflect. 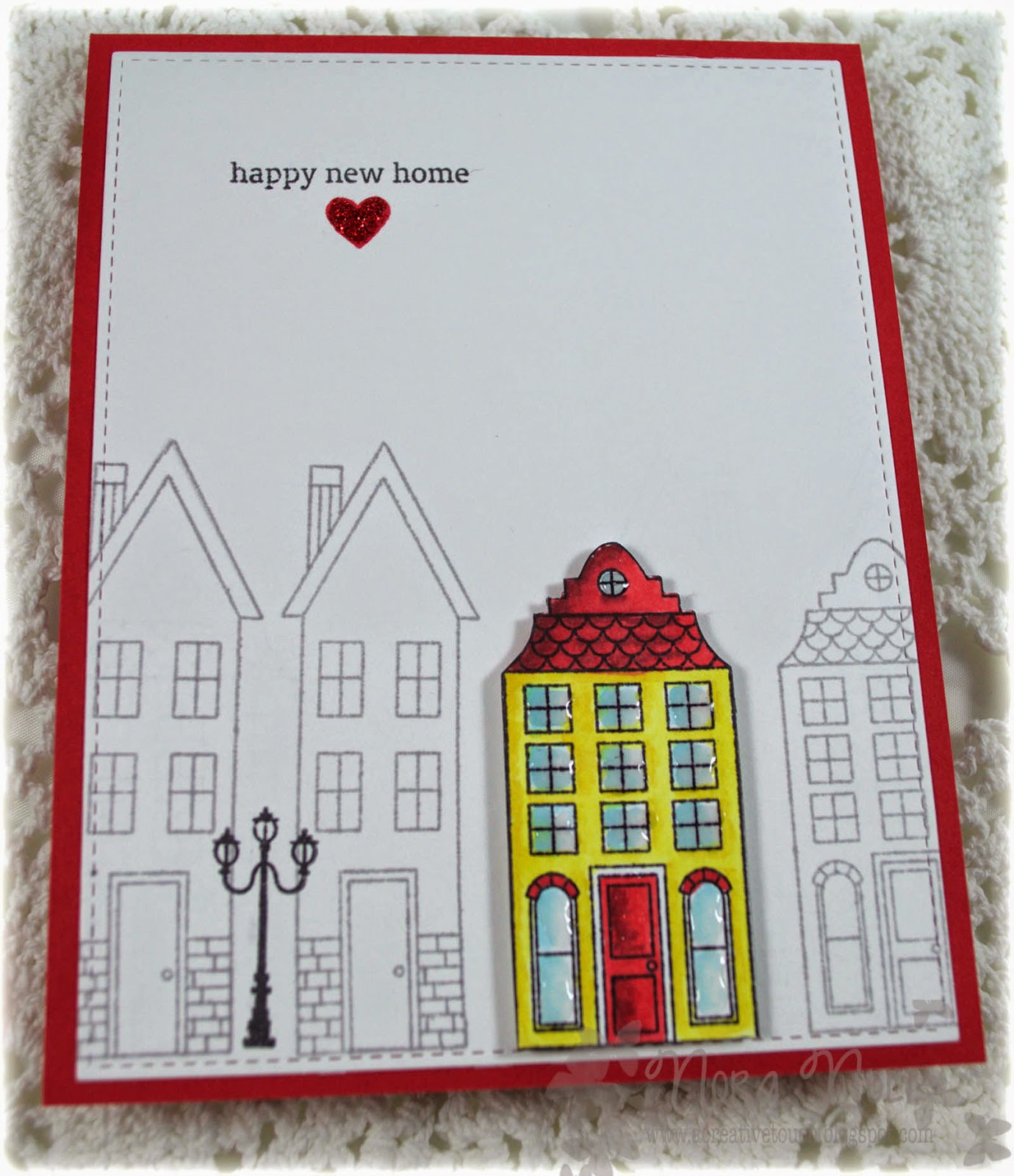 The last step was to stamp the sentiment in black, the heart in red and then to cover the heart in red Stickles. I really love how this came out. You can see how the glossy accents shines in the photo above. 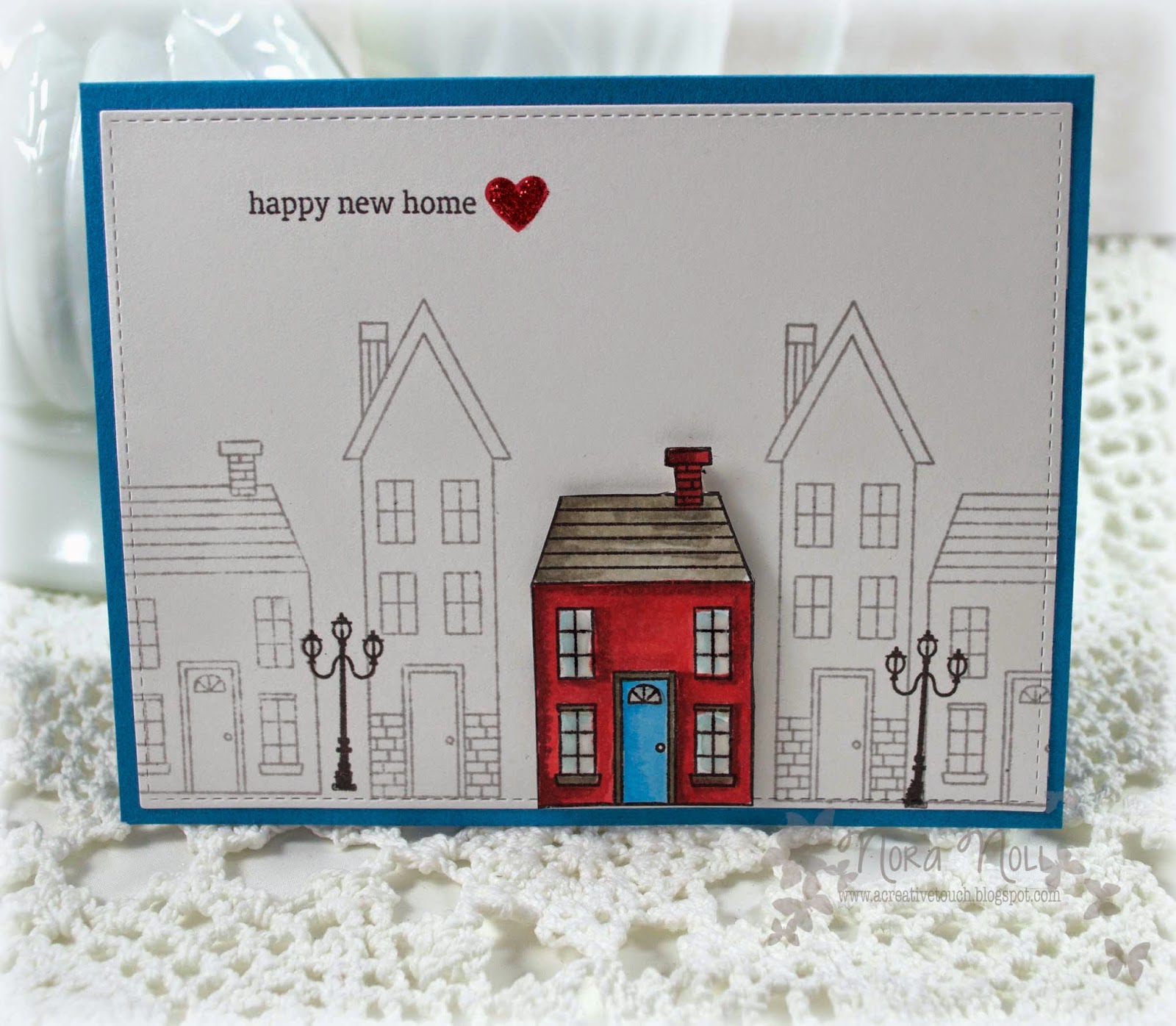 On this card, I stamped four houses in gray and then die cut a fifth that I had stamped in black on another sheet of white card stock. Instead of yellow, I chose to color this house in with red. I am obsessed with red!! 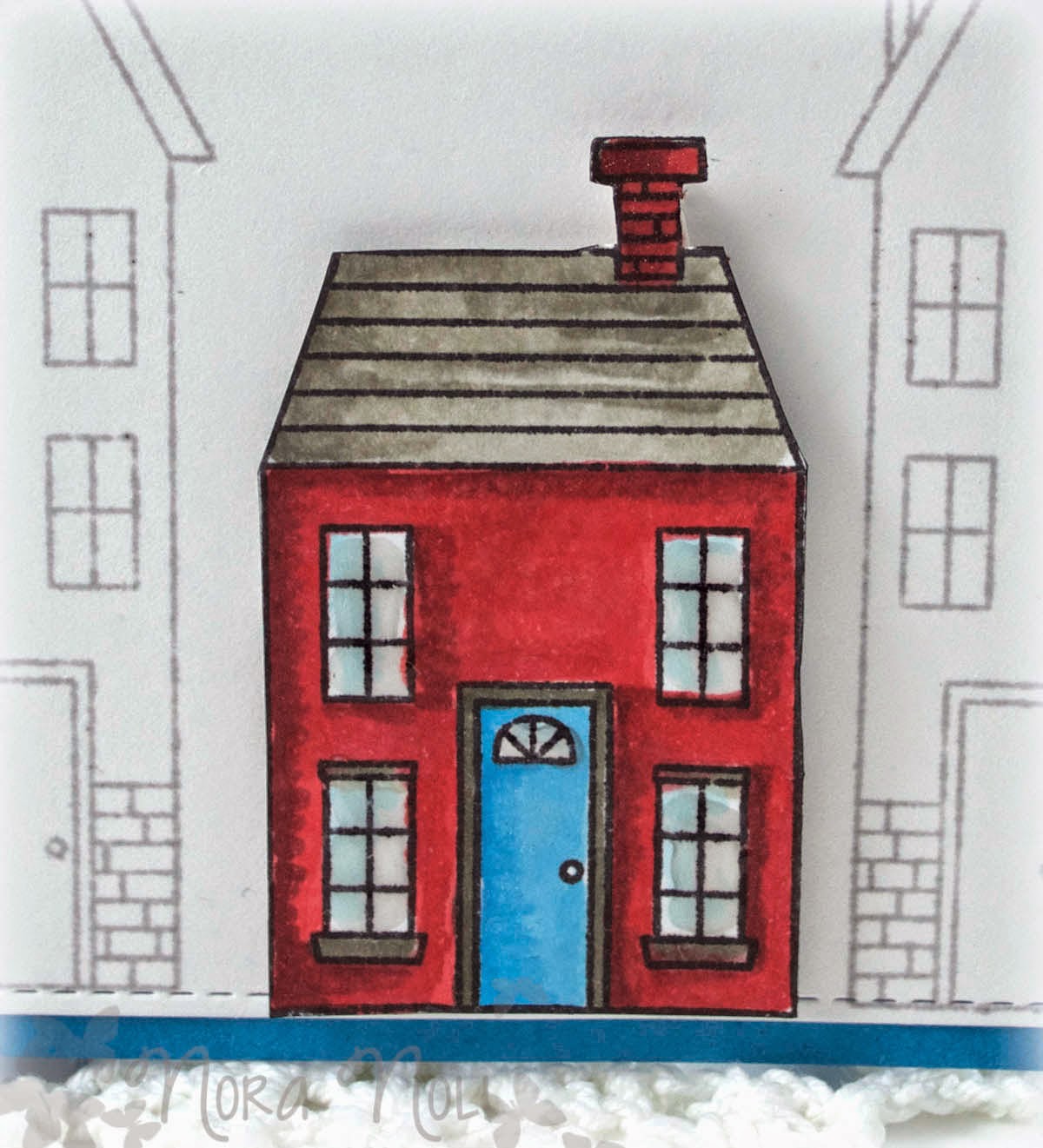 This house was also adhered to the card using foam adhesive. Like the first house, the windows on this one got a treatment of Glossy Accents. 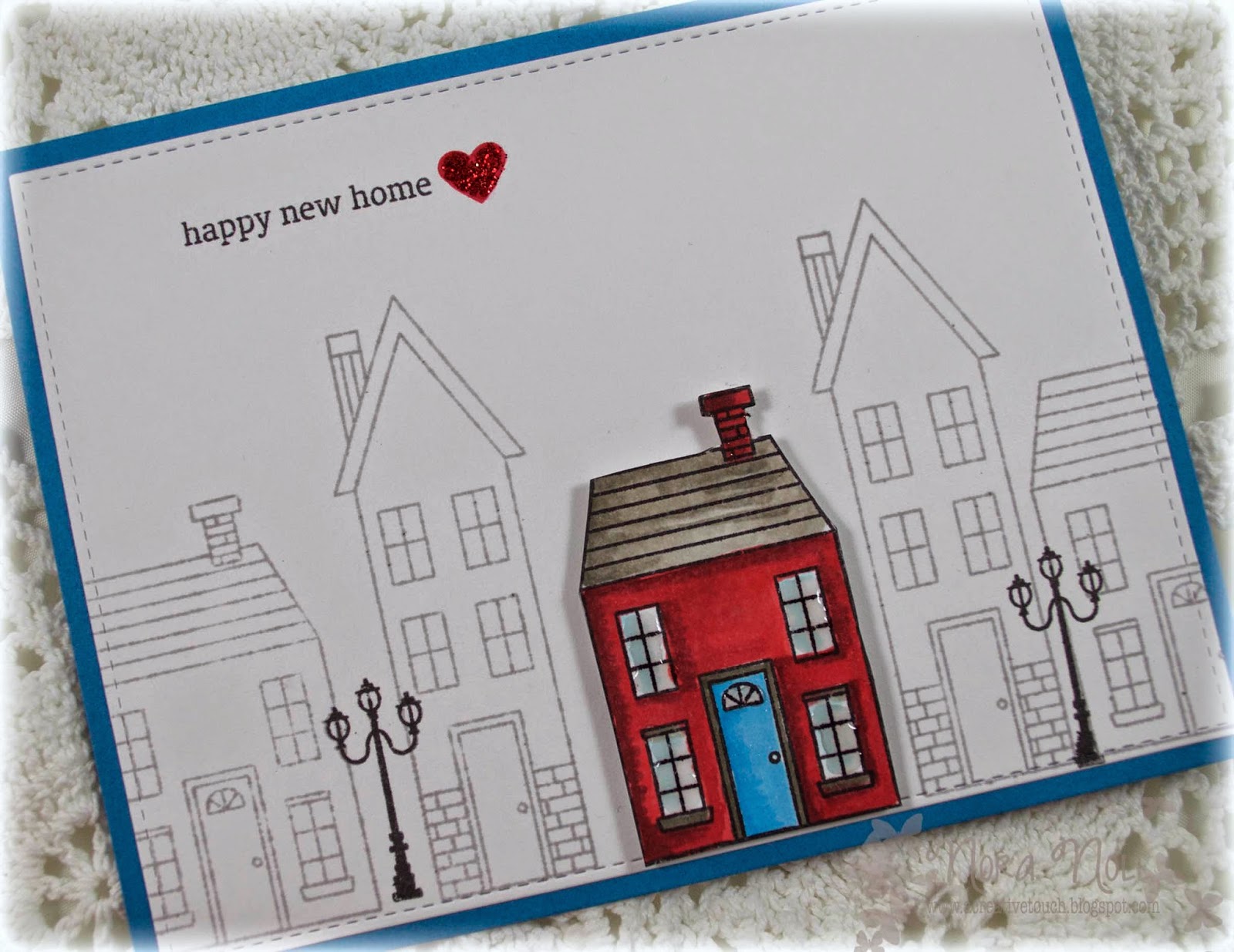 I think that I am going to try to stamp these houses with white on Kraft card stock next and use colored pencils to color one of them in. I really love how this came out!!

That is all for today. Thank you so much for stopping by!!

Hello readers!! I hope everyone had a fabulous Thanksgiving. I know I did. We went to my fathers and there was so much food that my husband over ate. He felt just a teeny bit sick. It was very hard to resist, I have to admit!

I have been having fun in my craft room for the last couple hours using stamps that have been sitting on my desk and some Stampin Up! stamps that I borrowed from my friend for the weekend. It is nice not to have to buy every stamp you want, especially when you are not sure how you will use them. I will be showcasing two cards I created with these borrowed stamps tomorrow.

As for today, I am showing you a card I created for the "Wanna Sketch Challenge #22" at the Dahlhouse Designs blog. If you have never been there, check it out. What a great blog with some really beautiful work!! I had fun browsing.

Here is the card I created: (I apologize for the photo-the lighting is off and I couldn't figure out how to fix it correctly!!) 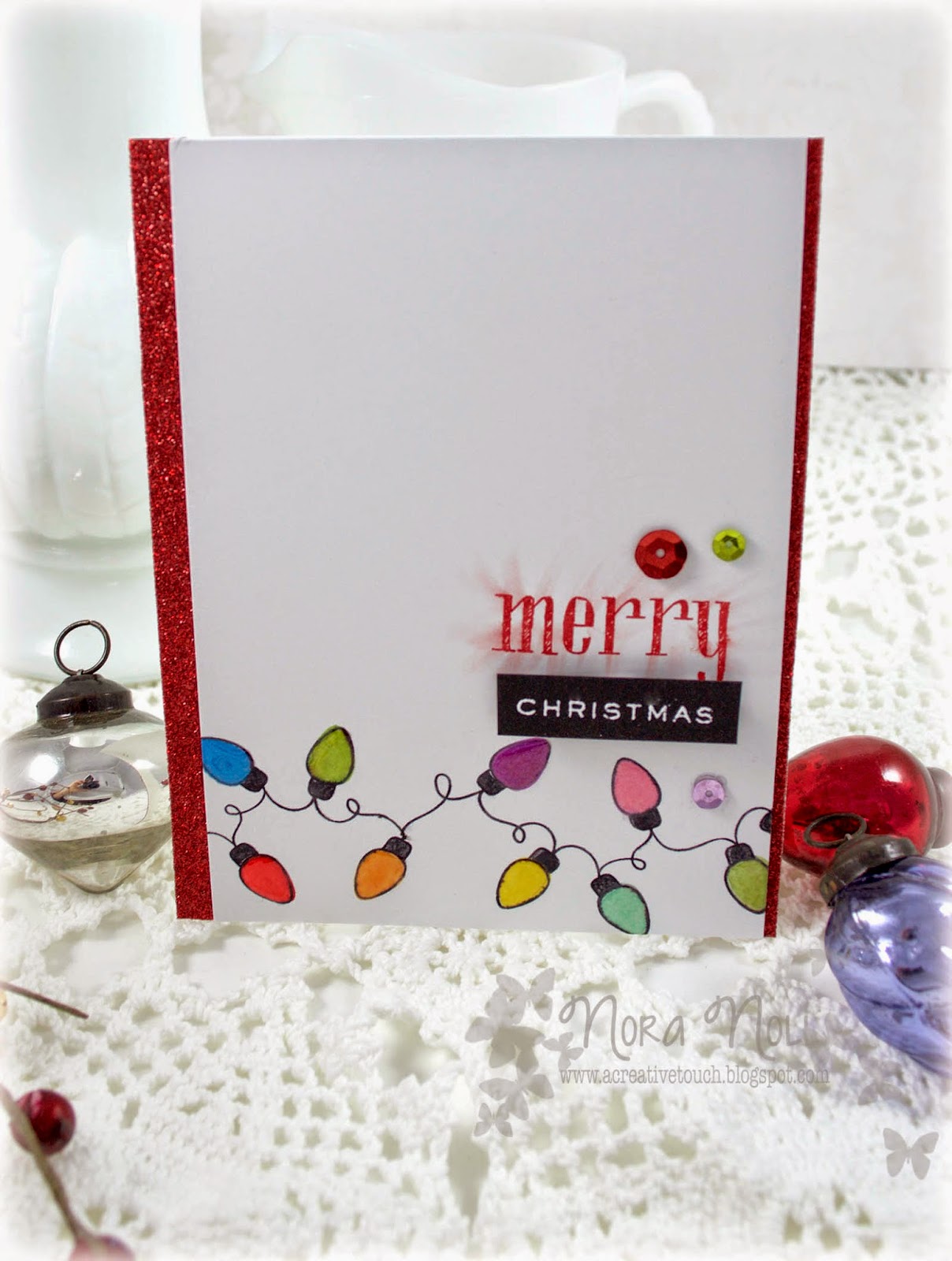 Here is the sketch that I used as my inspiration: 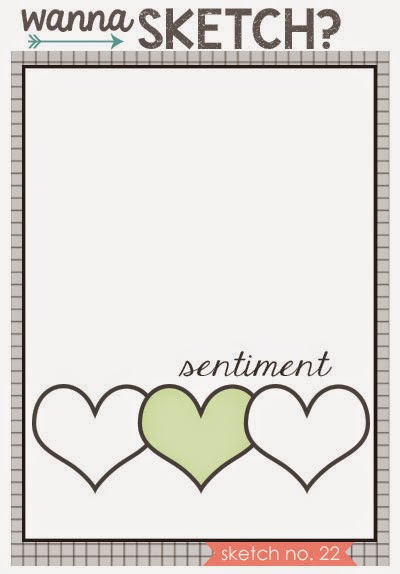 I started out by cropping a piece of white card stock and stamping the Christmas lights from WPlus9's "Festive Greeting" stamps in black. I then used various colored inks to stamp the colors inside the lights. Next I used my Wink of Stella pen to give them a little zing and then covered all of it with Ranger's glossy accents. I set it aside to let it dry. 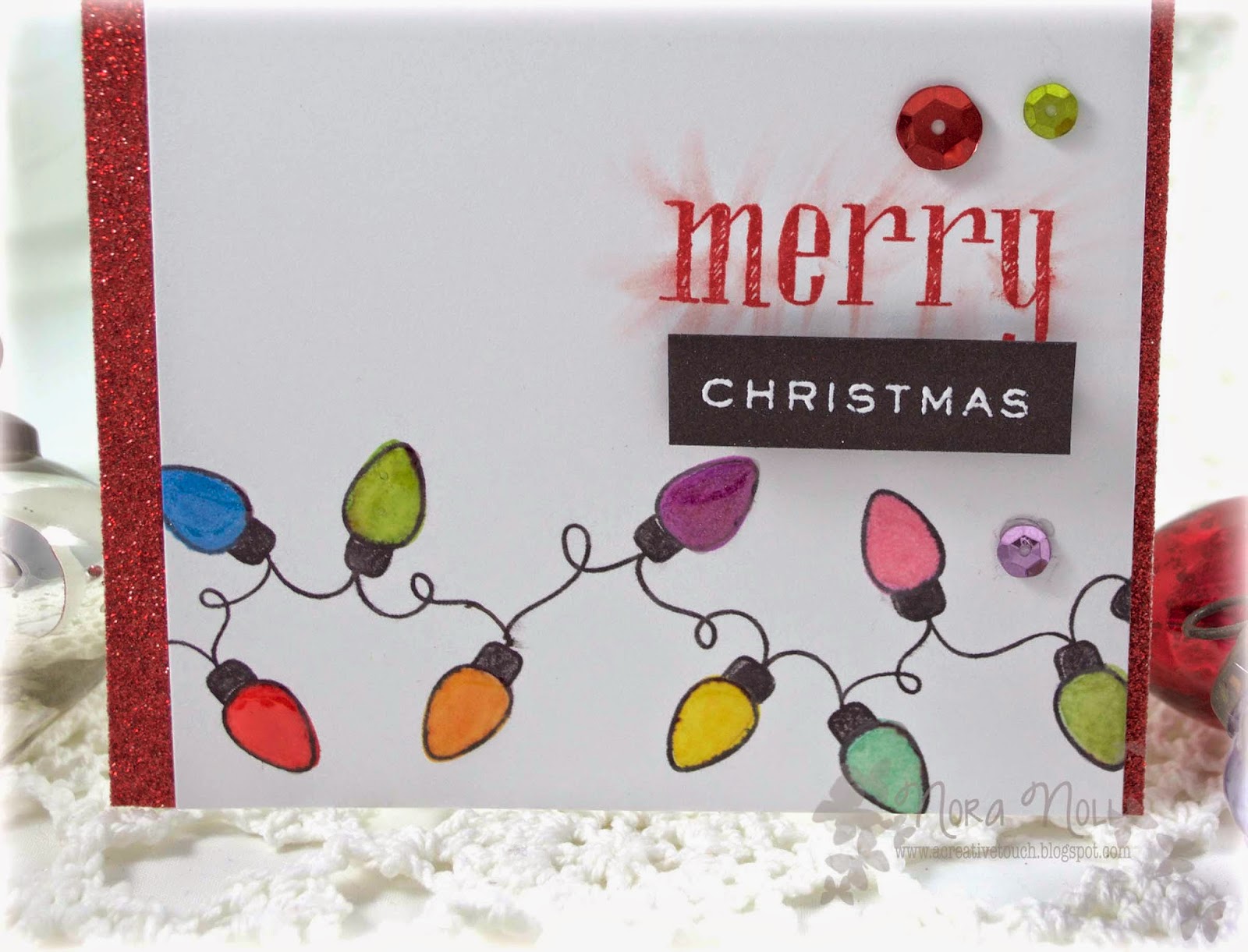 Here is where things get tricky. I stamped the "merry" sentiment in red ink...then proceeded to smudge the y. I was so upset!! I didn't want to throw the whole card away so I tried to think of a way to make it work. I took an eraser and smudged the rest of the word so it was uniform. I think I pulled it off, right? 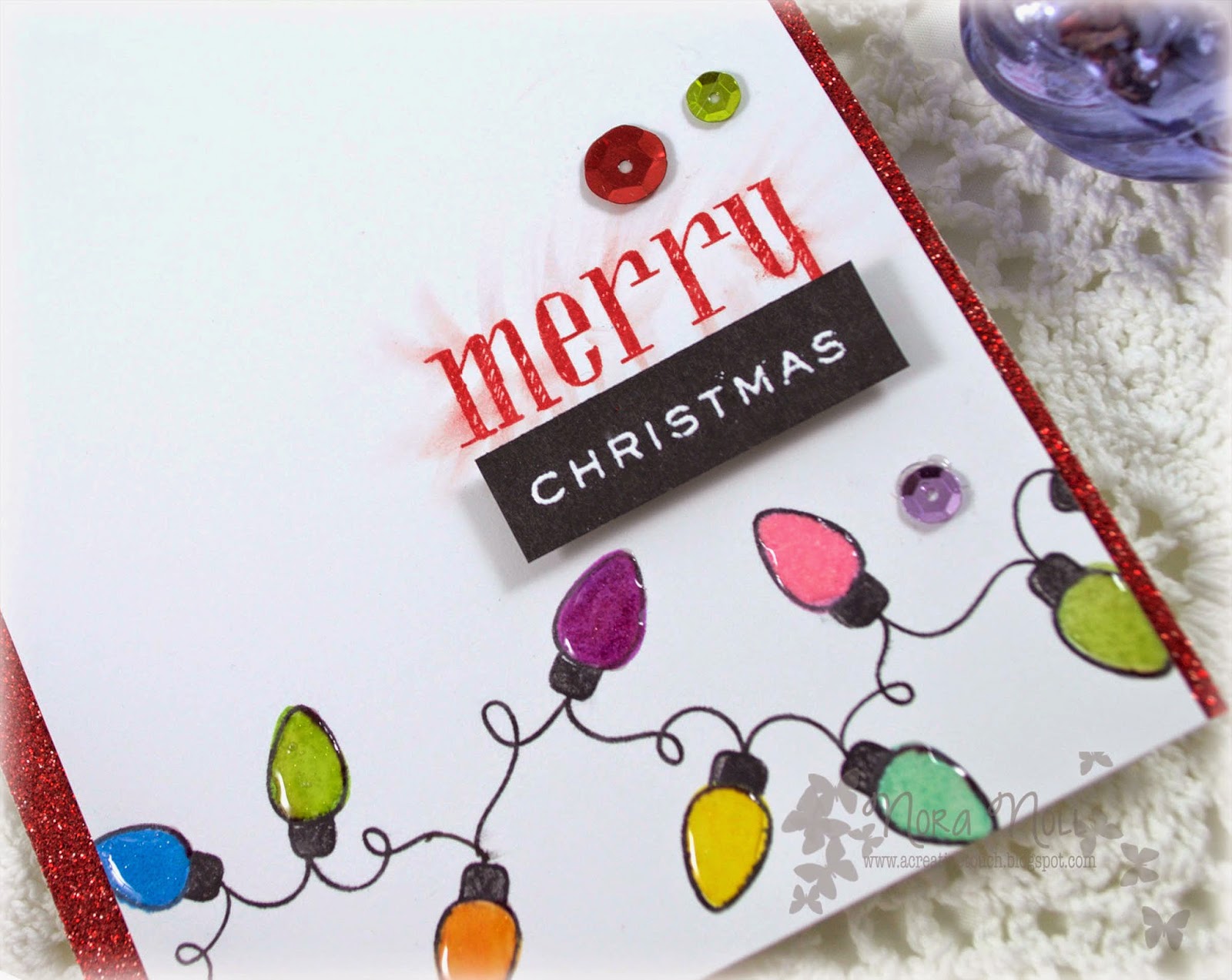 I then mounted this stamped piece on a card base that I had adhered red glitter tape to the right and left side. I adhered the "christmas" sentiment that I had stamped and embossed on black card stock with foam adhesive. The last little touch was to add the sequins. 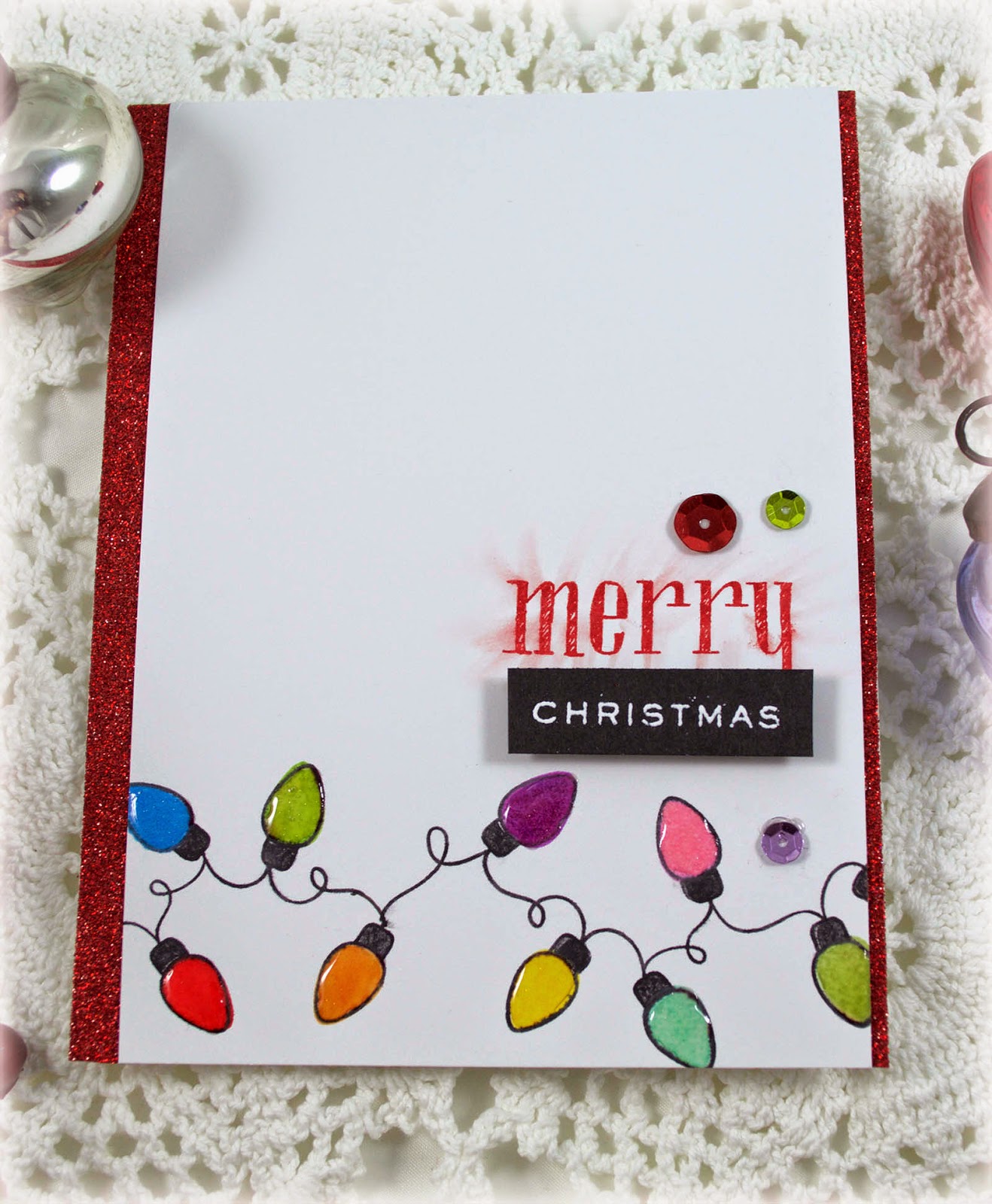 I am not sure I LOVE this card but it came out OK. The sentiment accident still kind of bugs me but that is okay, I guess. I really enjoyed using these stamps, though, and think I will use them next on some tags.

I am also entering this into the Simon Says Stamp Wednesday Challenge-"Anything Goes."

I thank you for taking the time to stop by.

It is Tuesday in blog land. One more day until vacation!!

Charlotte is presently sick with a bad cold, poor bug. Not a good time, either, as teachers are trying to wrap things up with quizzes and tests before the long weekend.

On Sunday, before she got sick, she and I went to a local park to take her photo for our annual Christmas cards. I know, most people show off their family but since Charlotte is the only one whom is photogenic, she gets star billing. Chris and I are AWFUL with photos. We blink, close our eyes, you name it. Anyway, I thought I would share a few out takes of my beautiful girl. We had a lot of laughs doing this, something that was much needed between the two of us. Lets just say that now that she is a teen, we do not often see eye to eye. 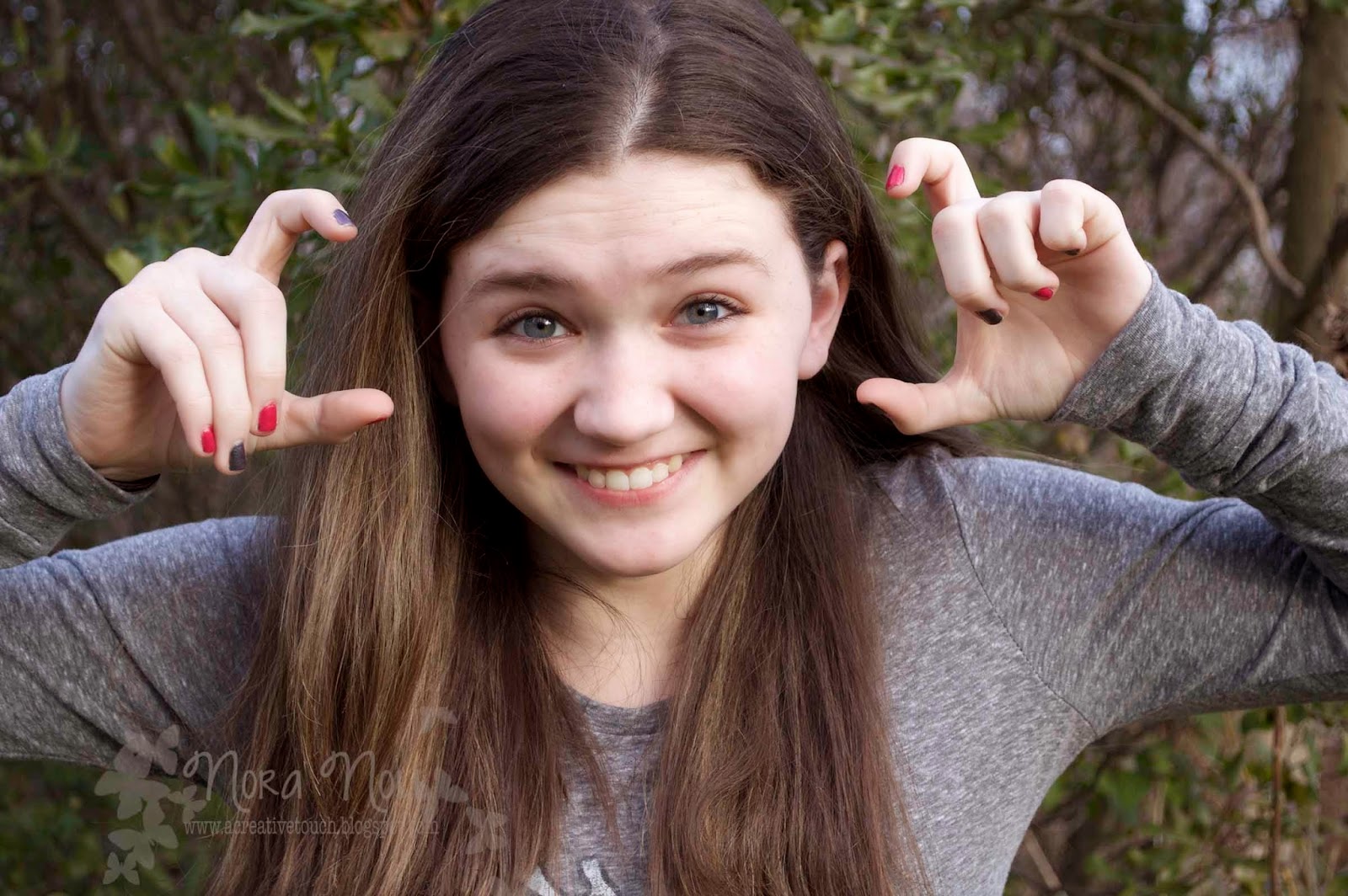 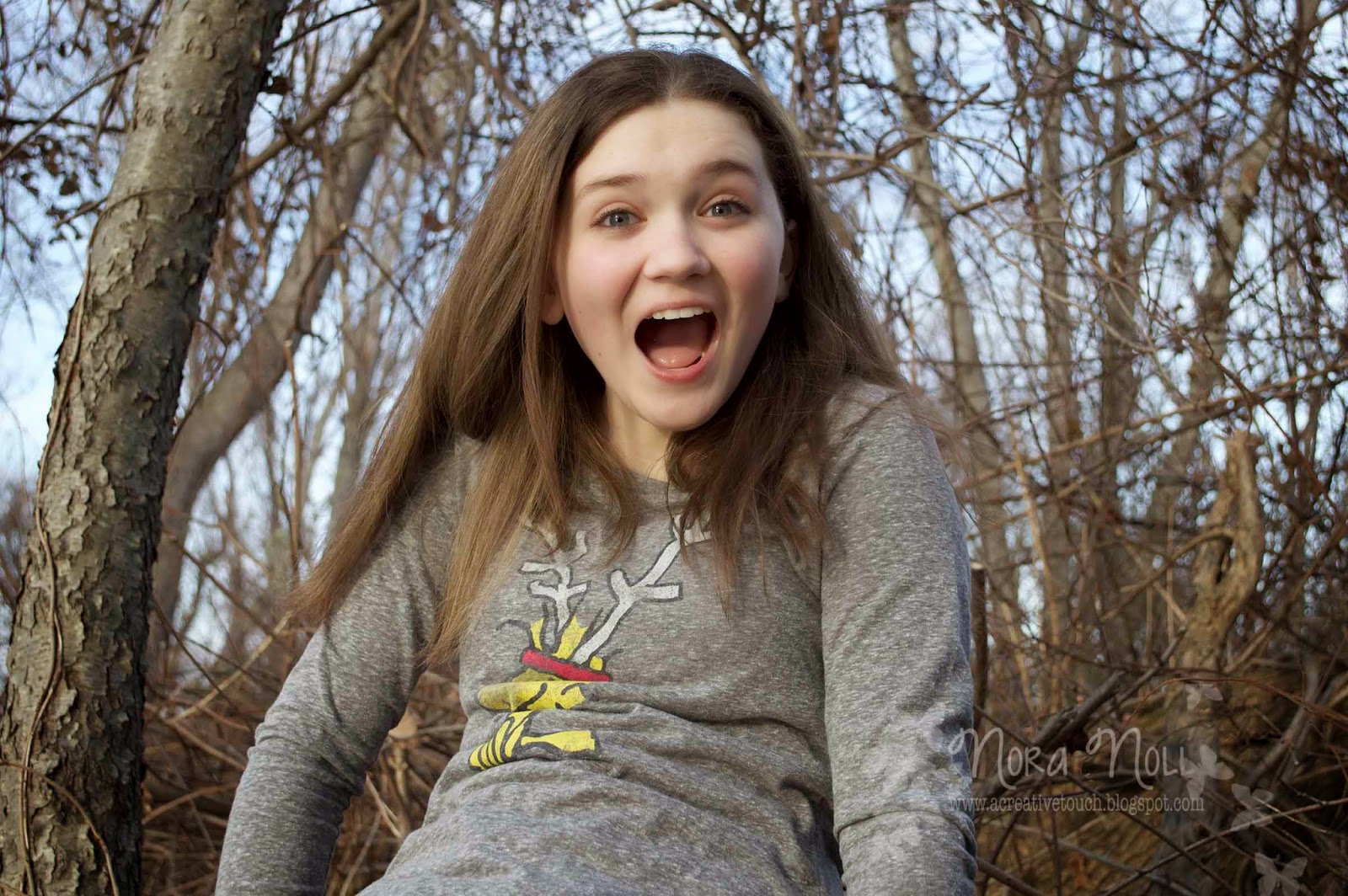 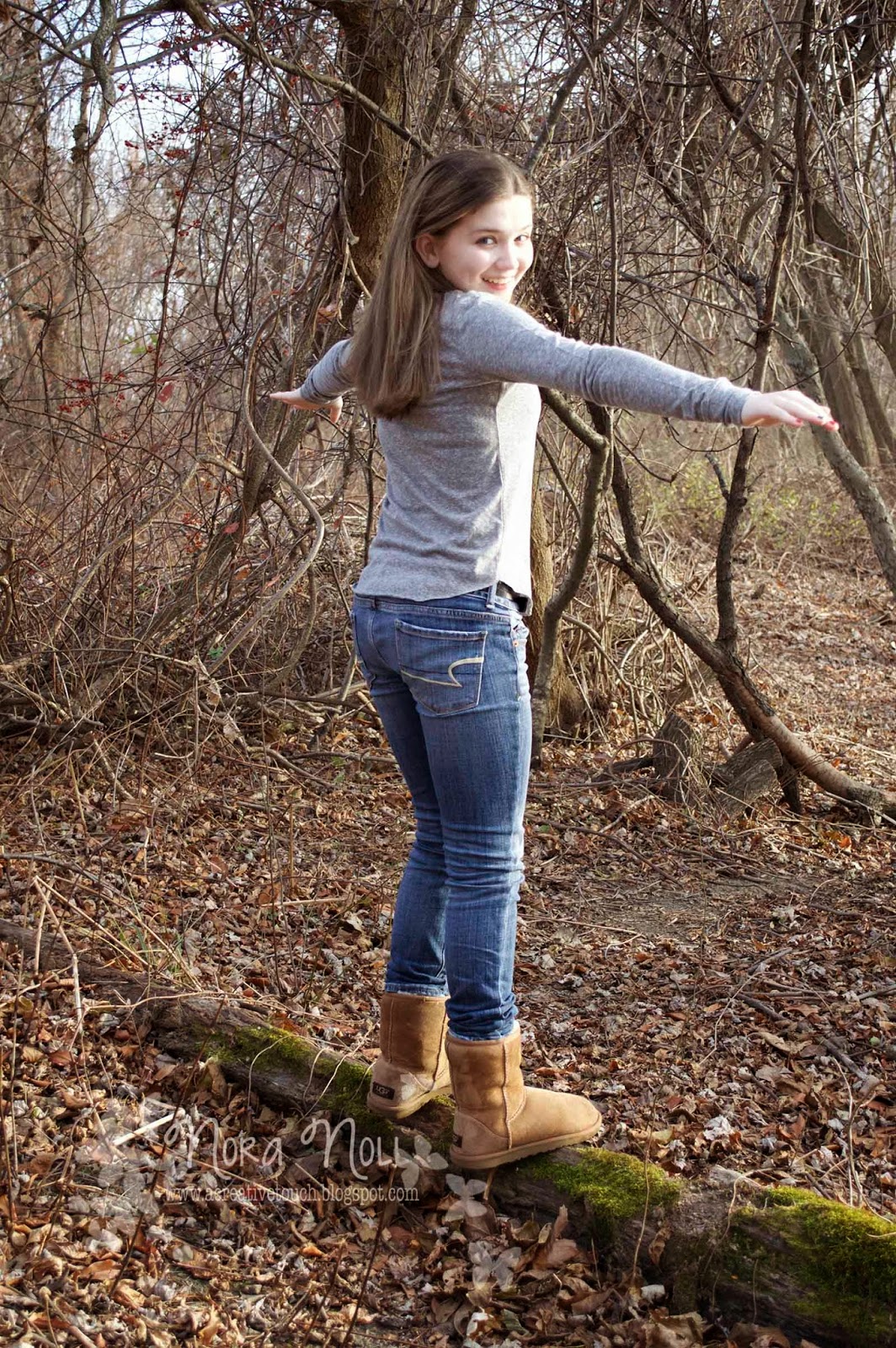 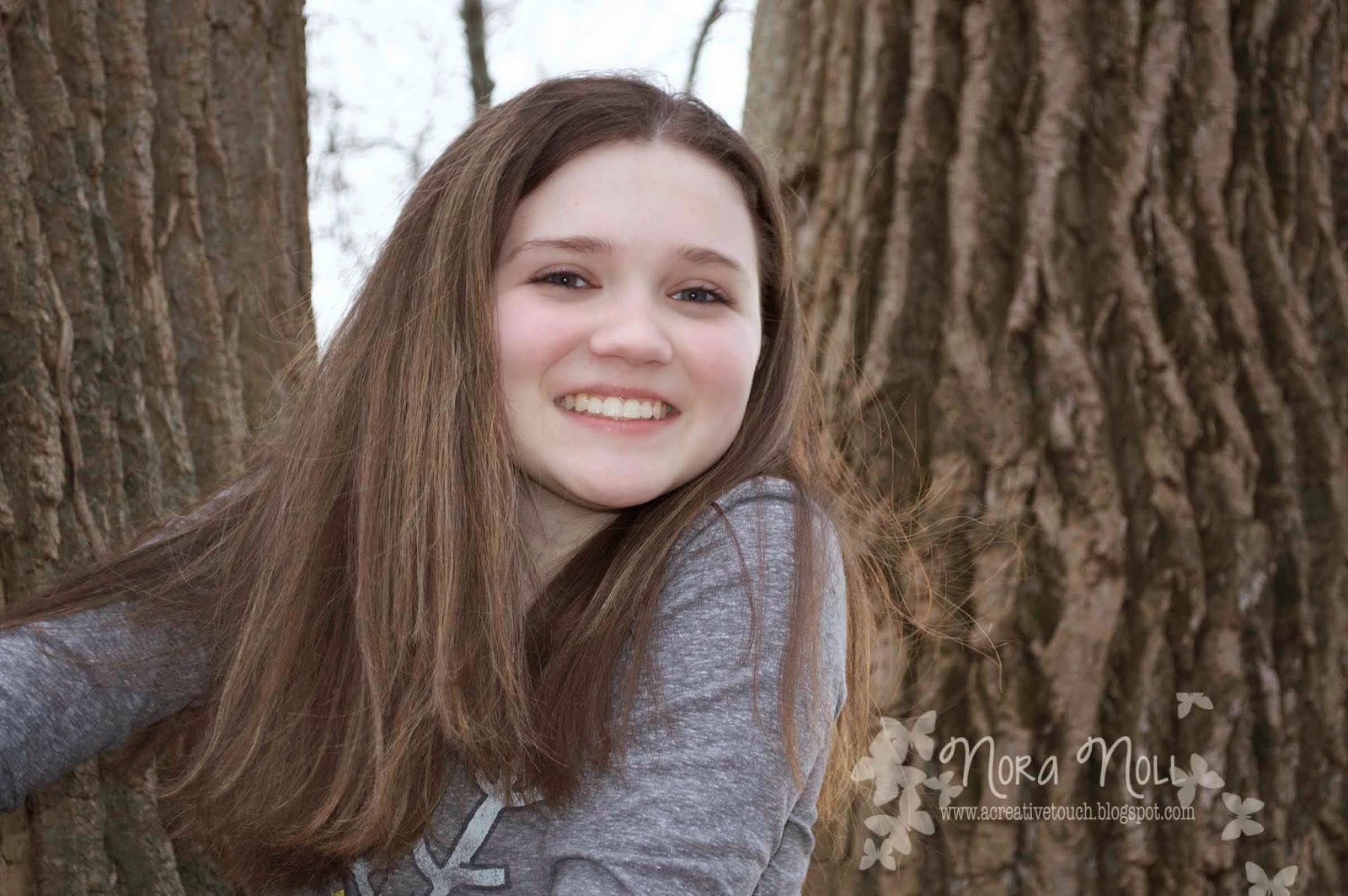 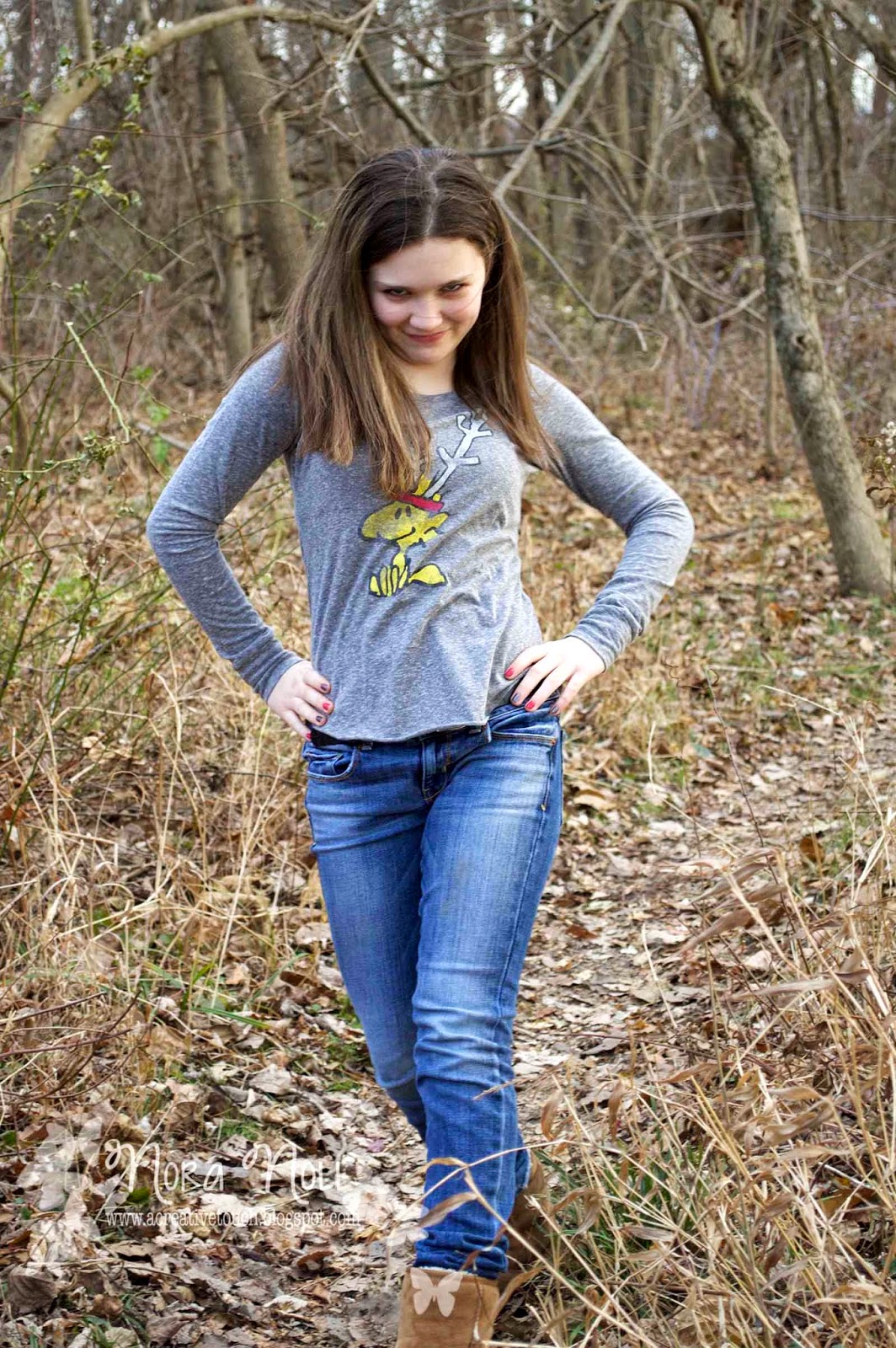 Now on to the last two cards I created for my friend's birthday present....

I used Paper Trey Ink's Botanical Blocks II to stamp the rose images and then colored them Copic markers. I set them aside and decided to do some techniques that I usually am too lazy to do on a card.

For my first card, I die cut two rectangles and then misted pink, white and silver onto the front of both. I then angled them over the card front. 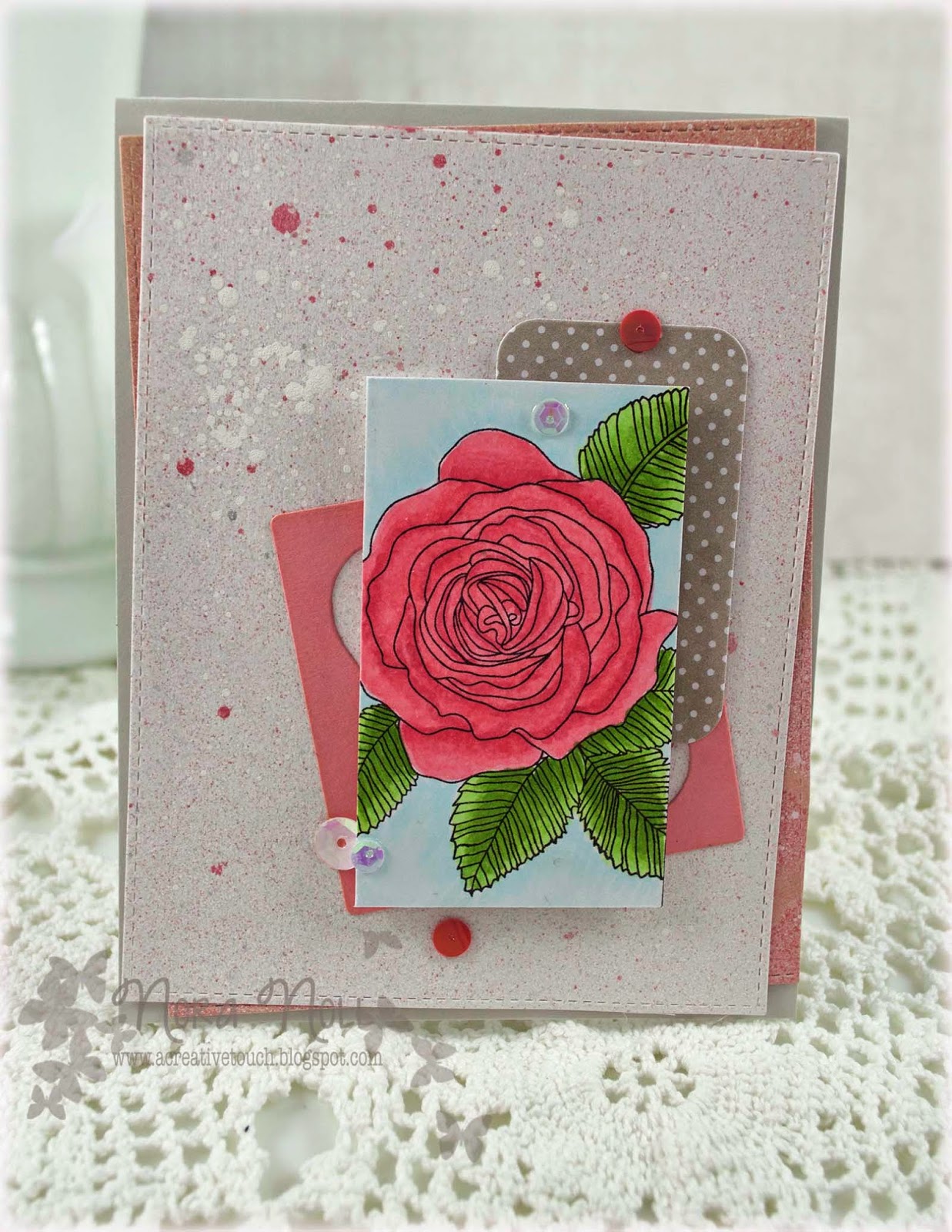 I then took some die cuts I had lying around on my desk and played with them until I was satisfied with the placement and then adhered them to the card front. Next, I used foam adhesive to adhere the rose image over the die cuts. 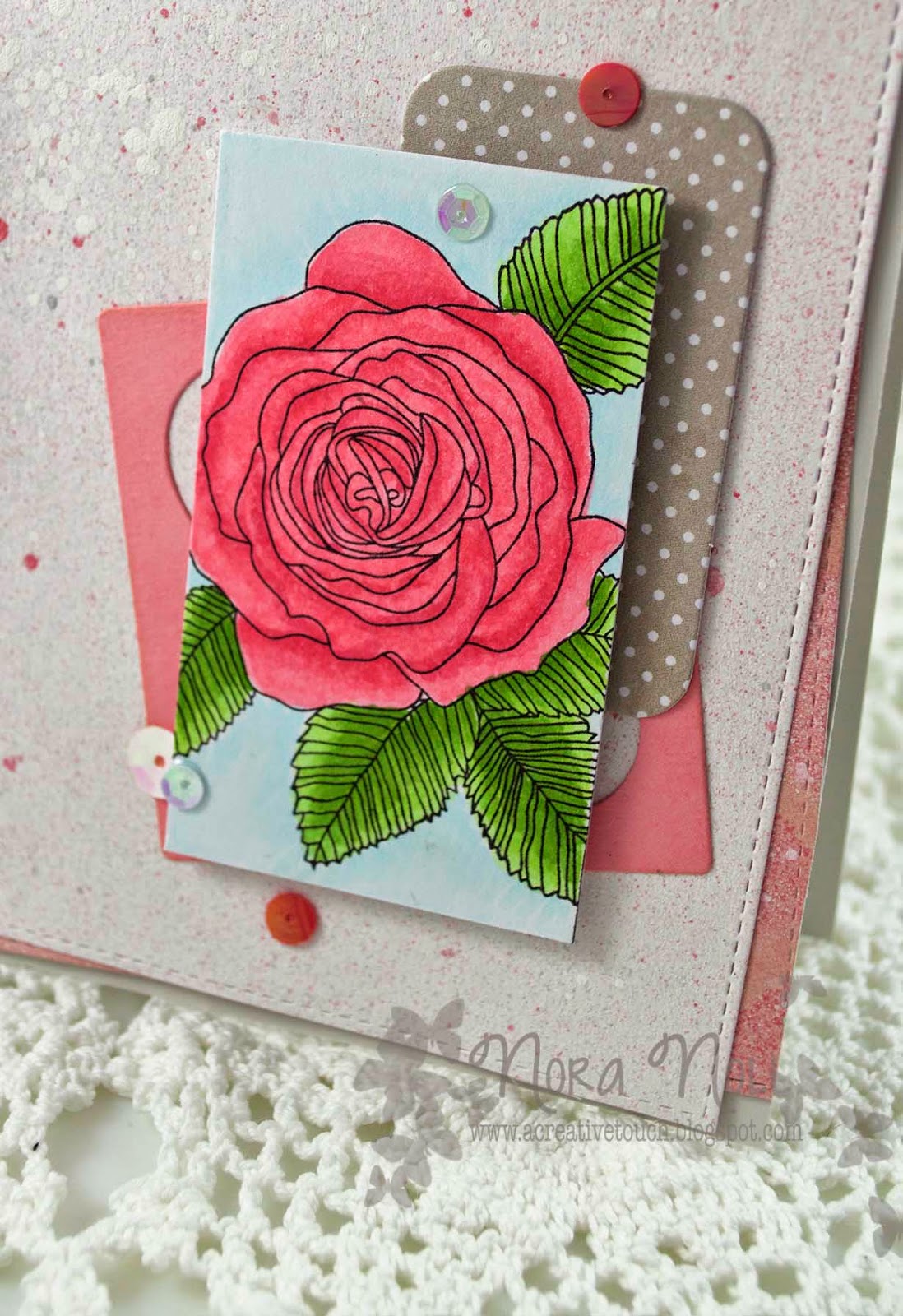 The last step was to take sequins and adhere them randomly around the stamped image. Not my favorite card but it was fun to play.

The last card I made I started off with a kraft card base that I stamped with an old script stamp from Stamping Up! that I had. Then I die cut a banner from pink card stock and adhered it to the card. I then layered a cropped rose image over the banner. 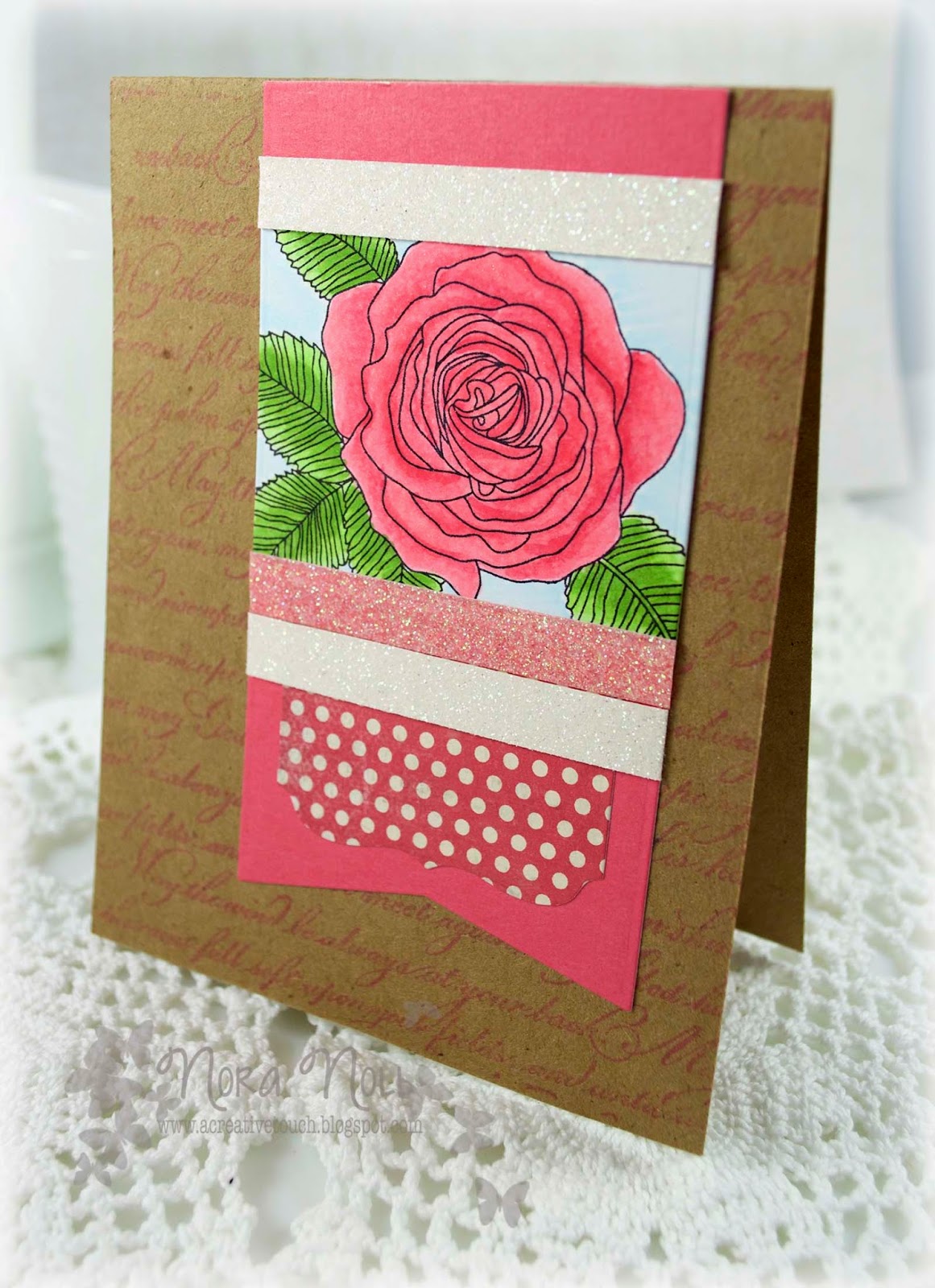 I decided to pull out some glitter tape and used it above and below the image. 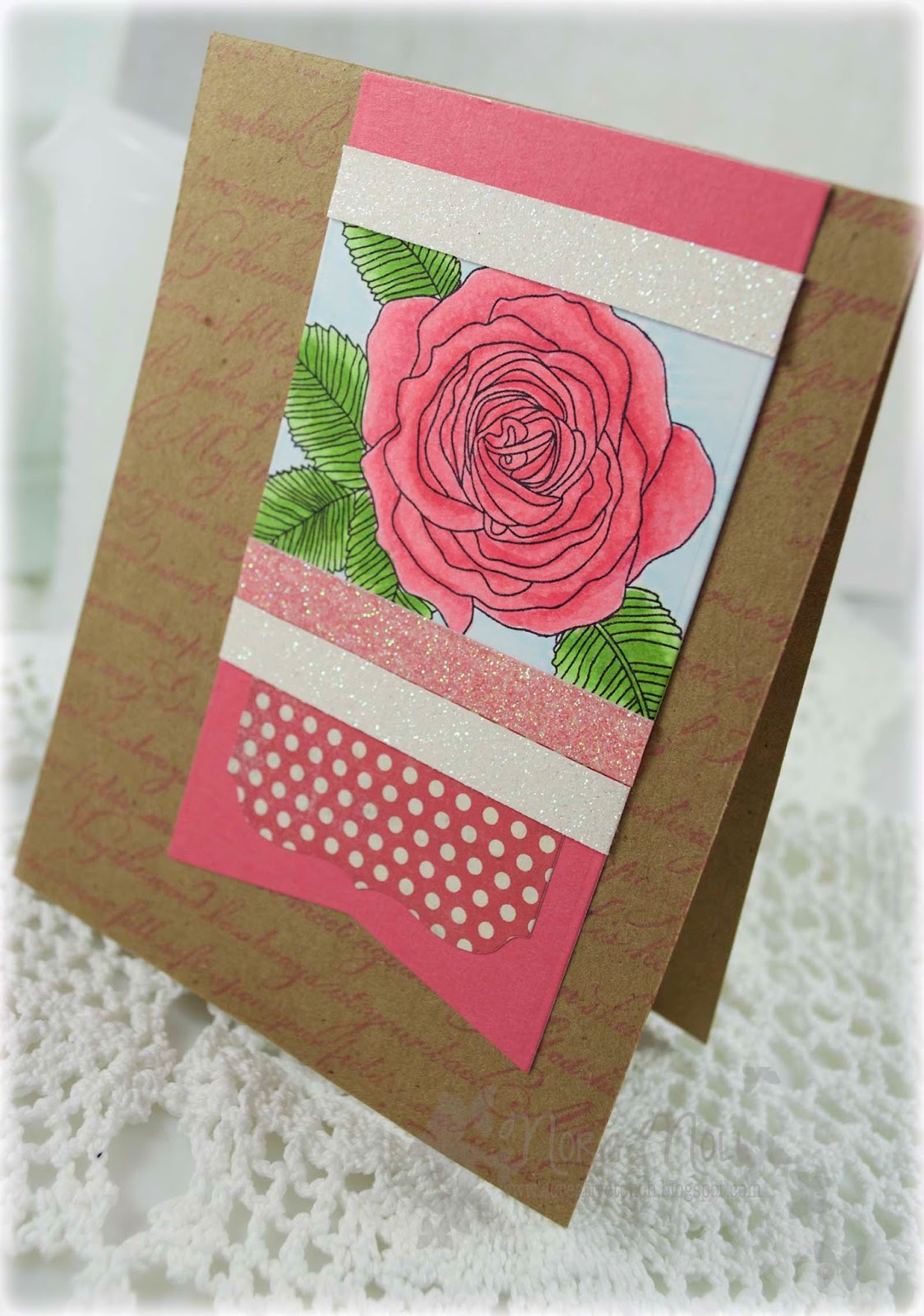 It is hard to see but the last step was to color the rose with a clear Wink of Stella pen.

That is all for today!! I thank you for taking the time to stop by!!