Hello everyone!! This weekend FLEW by and I did not get as far as I wanted in my chores. This week is swamped so I know they won't get done either so I am thinking next week is when I start the summer projects.

Instead of chores, I did quite a lot of shopping. I took Charlotte shopping for bathing suits. This is the second time we have gone out and thank goodness Target had some that she liked. Shopping for bikini's with a 14 year old IS NOT FUN!!!! I have to admit that I don't love bikini's either but it is what all the girls are wearing and I fight my battles where I can. I also could not wear a bikini at her age-I was too fat. I am trying to have Char feel good about her body so I would never say she couldn't wear one.

I also bought a baby present for my cousin. Now that is something I can sink my teeth into. Gymboree used to be my favorite store when Char was little so I went there to buy a couple outfits for a future cousin. I bought these two one pieces with matching socks for each. 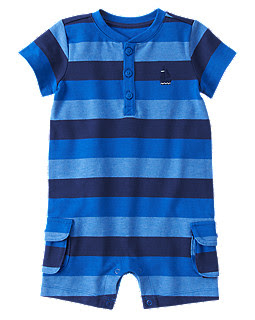 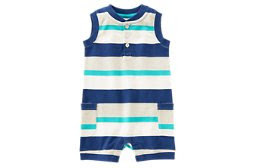 You may disagree but buying something for a boy is not as fun as a girl. They had some cute stuff but my eye kept turning to the adorable girl outfits. I need someone to have a baby girl so I can shop for her. (Chris does not-I used to spend A LOT at Gymboree because I had to buy all the matching accessories too. He was quite glad when Char grew out of that store!!)

I did have time in my craft room while some of my twelve loads of laundry were being done. (I offered to do Charlotte's this weekend as she has not done any for three weeks. She usually does her own.) I decided something this weekend as I was coloring. I HATE making one layer cards. I was using this adorable stamp from Penny Black "Fragrant," had it almost all colored in and splash!, my green Copic started to leak. I was SO MAD. I hate almost being done with something and having my card ruined. There was no way I could save it either.

I did complete one last Super Hero card for Simon Says Stamps "Wednesday" Challenge and the 30 Day Coloring Challenge.

Again, I used the Mama Elephant set "Tiny Heroes." The color scheme is similar to my last post but instead of the boy, I used one of the girls. 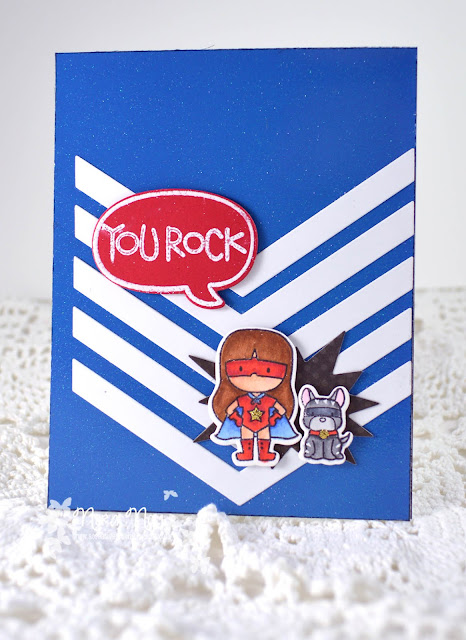 Isn't she cute? I used the blue diamond dust paper from Paper Adventures again as the background. I couldn't resist!! I also used the negatives from the boy card I created and posted the other day. 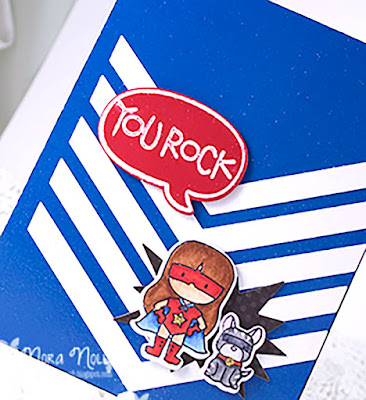 My embossing was not so hot on this card but that is okay. I used white pigment ink and I did not use my static guard brush before I stamped. I am always in such a hurry and forget that step but it is an important step. I was too lazy to go back and do it again. The card is hand made and I like the imperfection. 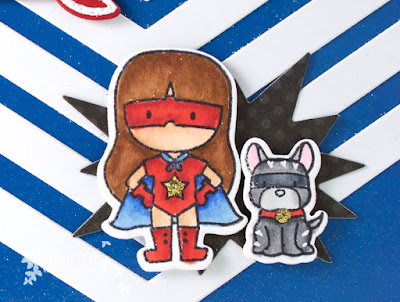 Here is a close up of the little girl. I should say that I highlighted both of these little images with Wink of Stella. Hard to tell, I know.

Anyway, that is all for today. Until next time... (which will probably be next week at the rate I am going!!)