Hello blogger friends. I have been away on vacation so I have not had any projects to share.

This post is about something different today. Last Monday, the day before we left for vacation, I had to say goodbye to my childhood home. I lived in this home from age 7 until I moved out at age 25. It was a very traumatic experience for me going through for the last time. It was the last tangible thread of my mother to me and very hard to let go. I know I have the memories but just knowing that my father still lived here was a physical presence of my mother. As I walked through the rooms, I relived little pockets of time and I thought I would share a few of those memories. I decided to post some photos I took that day too. All  are unedited and far from perfect. Life in this house was not perfect but it was a place that I will always consider home. 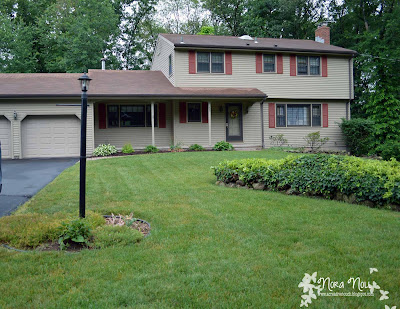 Here is the house as it is now. When I was growing up it had cedar shingles and was an ugly brown color just like the house I presently live in. My father has cut down a ton of trees so even the front and the side of the house has changed since I last lived here. We sledded down the hill in this yard in the winter, prom and wedding photos were taken and parties thrown. 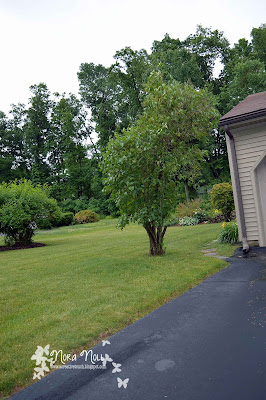 This is the lilac tree that my mother LOVED and my father cut down one time when she had bumped into it with her car one too many times. (She had her eye taken out due to cancer and had not depth perception about five years before she passed away.) I took three cuttings from this tree that are sitting in a vase. I am trying to figure out a) how to replant them and b) if I do replant them, where should they go? 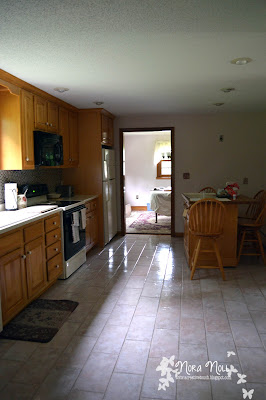 Here is the kitchen. Again, it is not how it was but it was the heart of our house. The cabinets were a pale color, with green trim. The walls had wall paper with green and yellow butterflies-my mother's favorite. We ate family dinners here almost every night, made cut out cookies every Christmas, and played many a game on the table with family and friends. My mother used to give up her dinner last minute to have enough for whatever friend was hanging around at the time. Sometimes when we had the music cranked up, she would grab us and try to have us jitterbug with her around the kitchen. 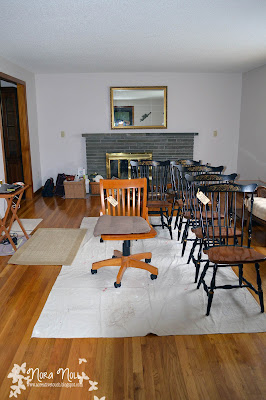 If the walls of this living room could talk!! The walls have been white the whole time my father has lived here. It also remained unfurnished for most of my childhood and had a bright green carpet. Two lonely gold covered chairs used to sit sadly by the fireplace. My sister Jen and I used to tumble down the hall into the living room-just enough to give us a running start to do acrobatics!! We would perform "shows" for my mother to watch. Later when my parents bought furniture, we were only allowed to go in it when there was company. Sometimes it was a nice place to sit in and look out the window when it was dark. 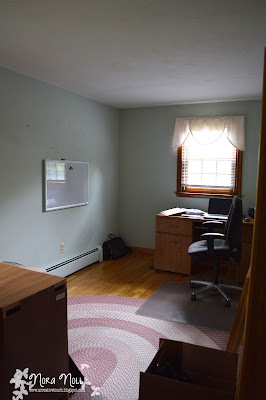 My sister and I shared this room when we first moved here in 1977. My mother decorated it with bright yellow and orange wall paper. On the floor was a matching yellow and orange shag rug-the beautiful colors of the 1970's. Poor Jen had a very messy roommate in me. My mother was always dumping my drawers or emptying my closet into the center of the room to make me pick up. Even then I was a "collector!"  Many hours of Barbies were played on that floor and games like "houseboat" were played on our bunk beds. You would get bit by a shark if your foot touched the floor. 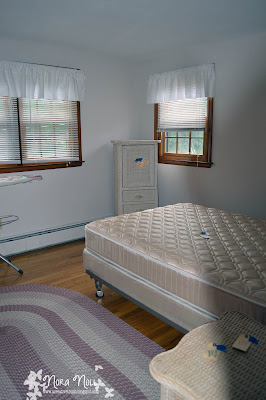 As I got older, I wanted a room of my own. Since I was the oldest, my mother had my youngest sister switch with me. This room was blue until I moved out at 25. I carved the name of my 5th grade crush in the window sill (Wes) and put my fist through a window pane when I was angry at 17. My father made me fix it and I wished I had never done that!! Many books have been read, music played, tears shed, things crafted and secrets shared in this room. 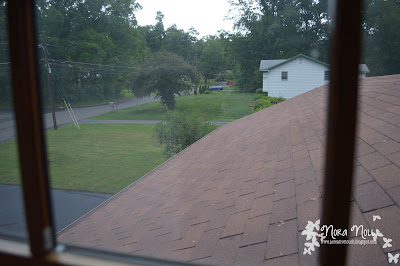 In my childhood room, the lone window to the right was a glimpse into the comings and goings of the neighborhood. I used to spy on the boys next door because I thought they were so cute!! 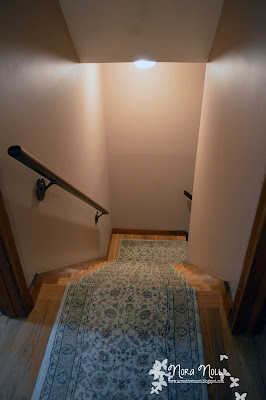 My room was the room to the right when you got to the top of these stairs. These stairs entered into our kitchen and these were a place of lounging when we were talking on the phone. The cord could reach almost to the top of the stairs. You could also here everything when people were talking. Did I tell you I was nosy? I listened to a lot of conversations I shouldn't have while I was growing up. I also used to sneak down these stairs and try to watch TV when I was supposed to be in bed. I thought I was so sneaky but my mother always caught me. 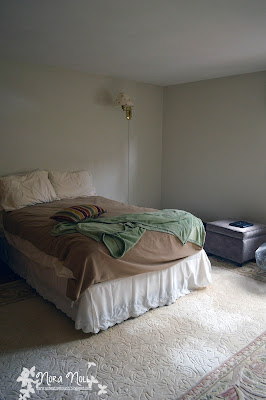 There are some spaces I have not shared because they really were not all that important to me. I have saved my parents room for last though. We were never really able to go in here without permission. Again, it was mostly white while we were growing up and had a wall paper border around the top. Mauve colored carpeting covered the floor and dark heavy, sturdy furniture took up much of the room. On the left, a trunk sat were my mother used to hide things. When we had baby sitters, I would take everything off and open it to see if there were any Christmas presents in it. My mother died in this room and even though my father re-married a wonderful woman whom I love dearly, this room always remained my mother's room to me. At the end I took care of her here. We had said things that needed to be said and she forgave me for all the things I ever did-and there were a lot. This room was the hardest for me to say goodbye.

The closing was June 19th and the house is no longer my dad's. Another family will be making memories here. I hope they are as happy as the ones that I have had.

If you have gotten all the way to the bottom of this, thank you. I don't post personal stuff on here that much but some things need to be remembered. I am working on some projects that I will be sharing in a couple days. Have a wonderful night.