Today I wanted to share two cards I created using Clearly Besotted's "Out of this World" stamp and die set. Can I tell you that I have had so much fun making little "aliens" or monsters, as I like to call them. They are so FUN to COLOR!!

My first card, I created a shaker card. If you read my blog, you know how much I HATE making them but I have to say, this came out pretty well. I did get a bit of glue on the front of the acetate but I covered it up using some Pretty Pink Posh stars. 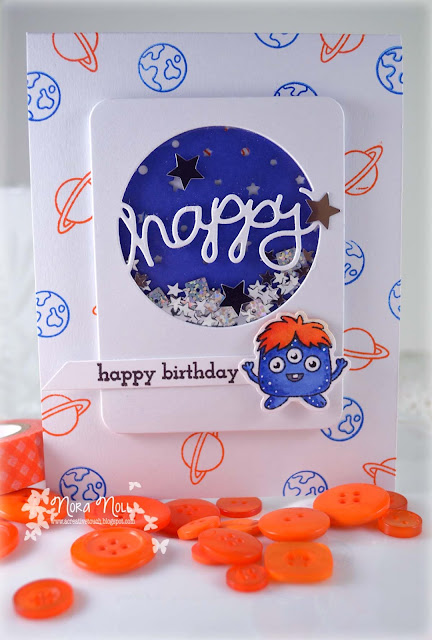 The first thing I did was stamp the background in with some blue and orange ink. I then created the shaker box using a Papertrey Ink "Phrase Play" die. I matted it with a blue panel like I created in this post. The fun silver sequins are a mix of stars that I have had in my stash for at least 15 years and some silver squares I purchased at JoAnn's. I then added the shaker box to the card front. 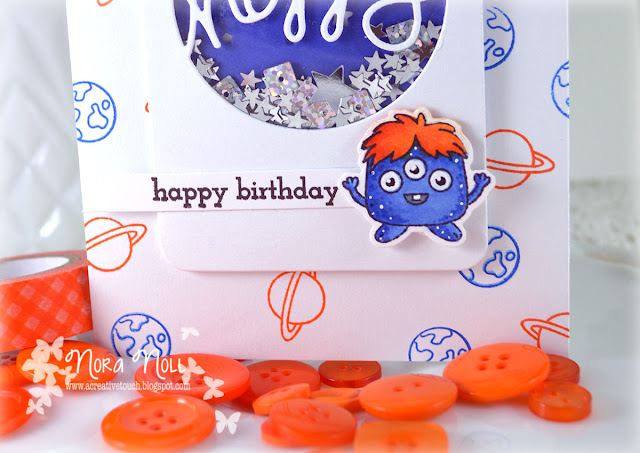 I then colored the little alien in with Copic markers, some gel pens and added him, as well as a sentiment, to the front of the card. I finished it up by adding some Pretty Pink Posh Silver Stars to cover the my glue mistakes. 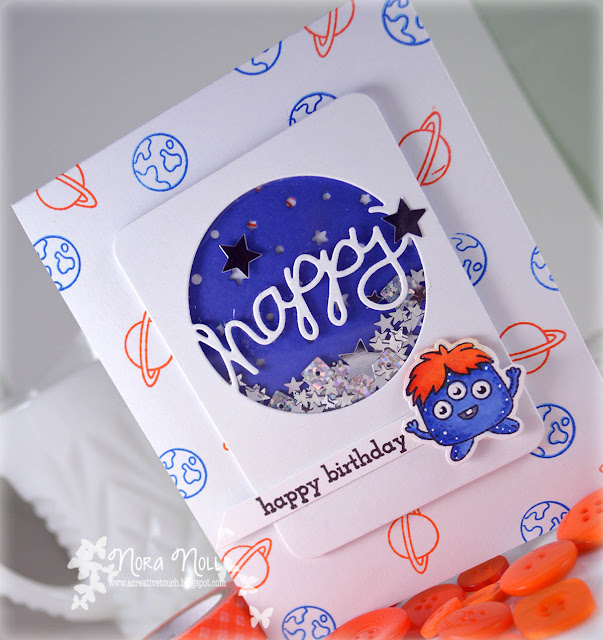 I also used some clear Wink of Stella over the orange hair. It is hard to see the shine in this photo. 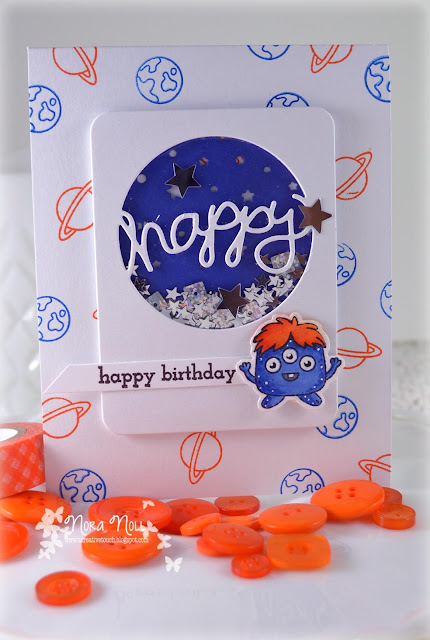 I LOVE how this came out. It is the first shaker card I have made that I have actually been happy with too!!

For my second card, the main inspiration was a card on the Pretty Pink Posh website. I used PPP's "Storybook #1" die as part of the inspiration. 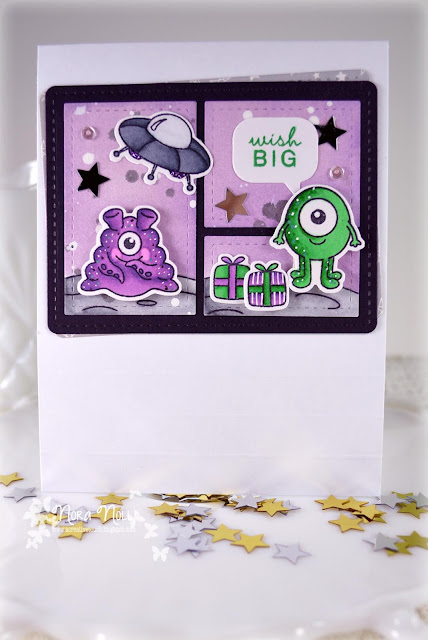 I started by die cutting the storybook die out of white paper. I then created the bottom of the scened by stamping the planet image from Clearly Besotted's "Out of this World" stamp set. The sky was created by blending purple distress inks and then silver and white mists were shaken on top. I then adhered the panels on top of a black rounded edged rectangle die cut. 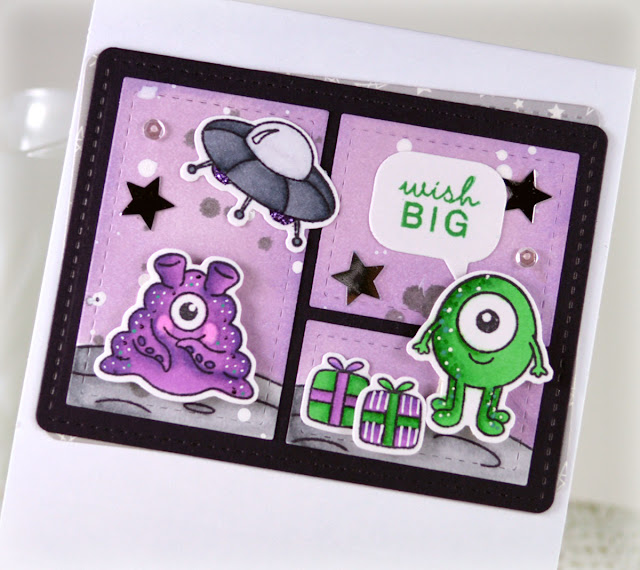 Next I scored the white card base. I then adhered both a patterned paper star panel and the black panel with the scene onto the card front.

I stamped, colored in and die cut the aliens, space ship and presents. Every image was colored in by using a combination of Copic markers and gel pens. I am kind of obsessed with using gel pens to enhance my Copic coloring on some of my images. It made the aliens oh so much cuter! 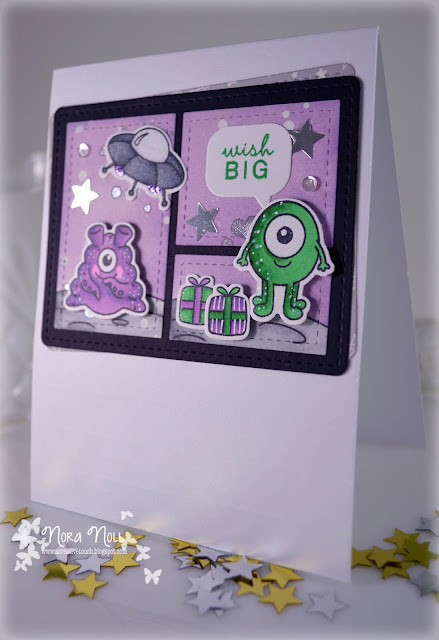 I adhered the images onto the purple scene using a combination of foam adhesive and flat adhesive. I added some Pretty Pink Posh star and clear sequins around the panels randomly to give the sky a little bit of a WOW factor. I also covered the space ship in clear Wink of Stella and used some purple Stickles at the bottom of the ship where the lights were. 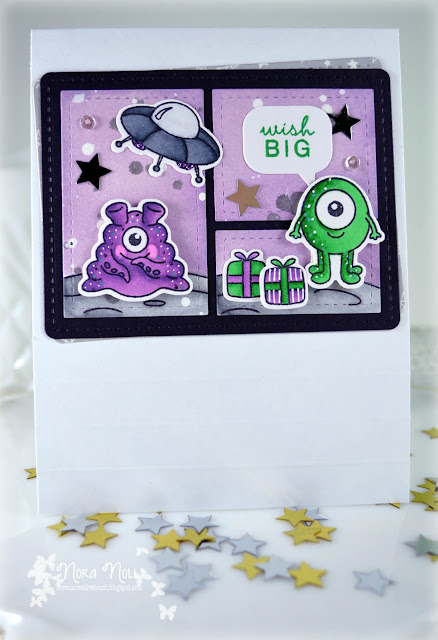 I LOVE, LOVE, LOVE how this card came out. It was a lot of work and took a ton of time but it was worth it.

I am entering this into Darnell's NBUS Challenge #5.

This is the first time I have used that PTI phrase play die even though I have had it for a year!! I also am using my PPP Storybook die for the first time too.

I thank you for stopping by. Have a FABULOUS day!!