Hello again!! This is my second post of the day. I have been busy creating cards for World Card Making day. I browsed a lot of blogs but the one that I kept going back to was the Winnie and Walter blog. They posted some really fun challenges and I played along with four of them today. I might do some more tomorrow if I have time too!!

The first challenge posted was to create a card using a camera as a theme. I created a fun birthday card. 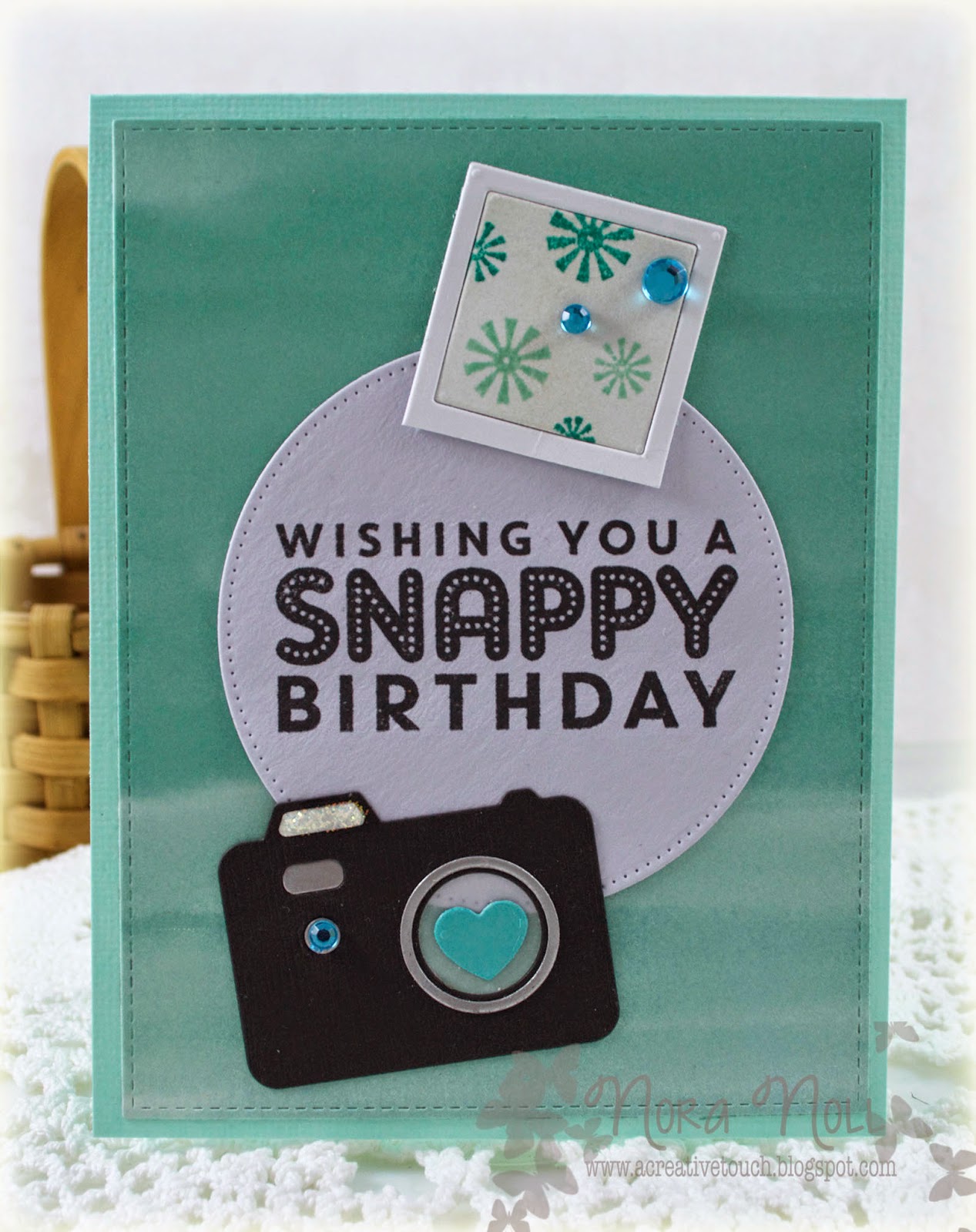 The first thing I did was to choose a color scheme. I had the background scrap sitting on my desk so I decided to use that. Then, I die cut the circle out of a gray scrap, the camera out of various colored scraps and the photo frame out of white. All the dies I used were from My Favorite Things. Next I stamped the sentiment onto the circle in black ink and adhered it to the card.

I adhered the camera next, piecing it together piece by piece. 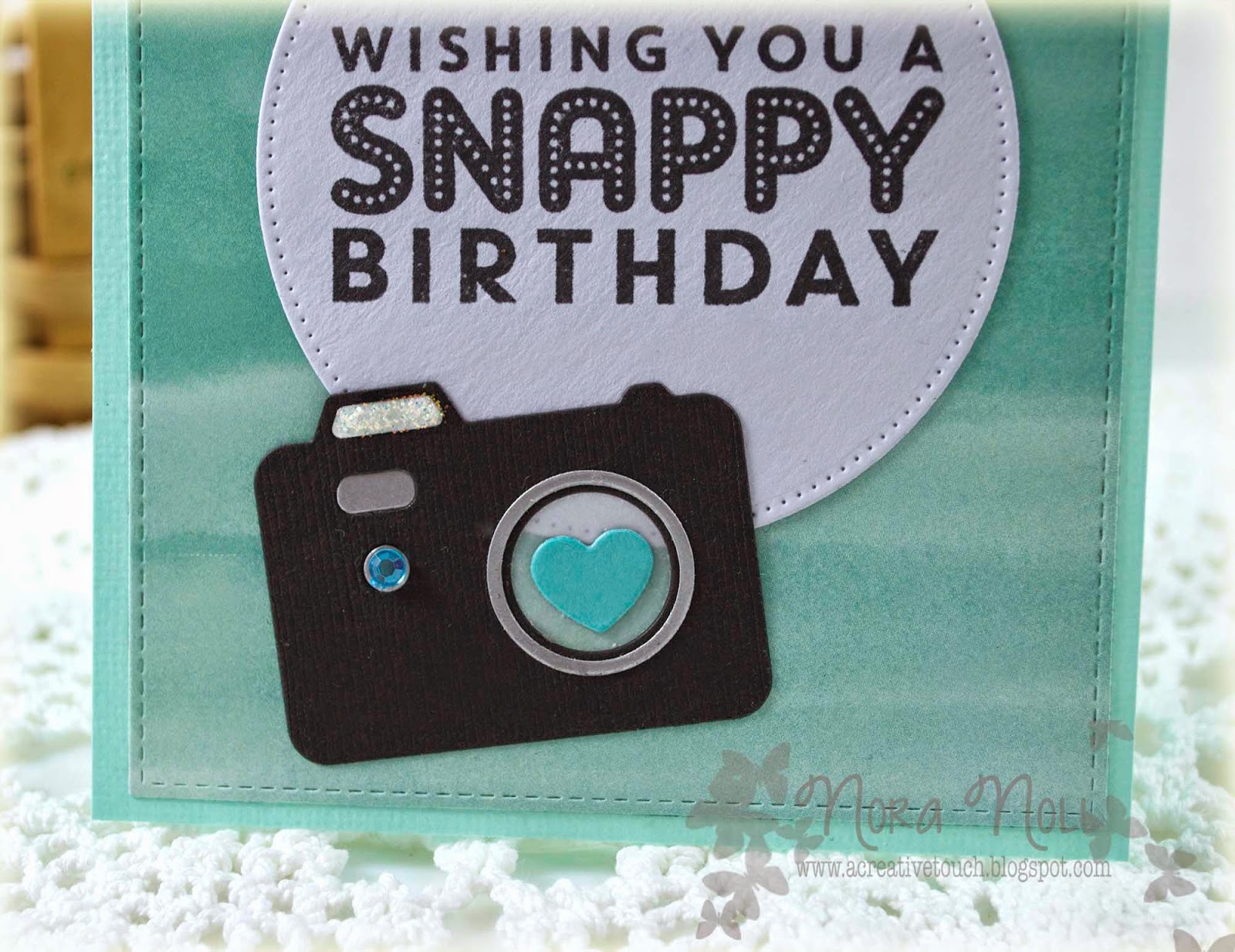 The little square at the top was originally a die cut Polaroid frame but I cut part of it off due to spacial reasons. It wasn't a requirement to use Winnie and Walter stamps for these challenges but I chose to do so on this card. (I only have one Winnie and Walter stamp set too. I LOVE their stuff but I am on a no buying challenge right now and have been since August. It is KILLING me!!) I stamped some fun images from their "Big Bang Bling" set. 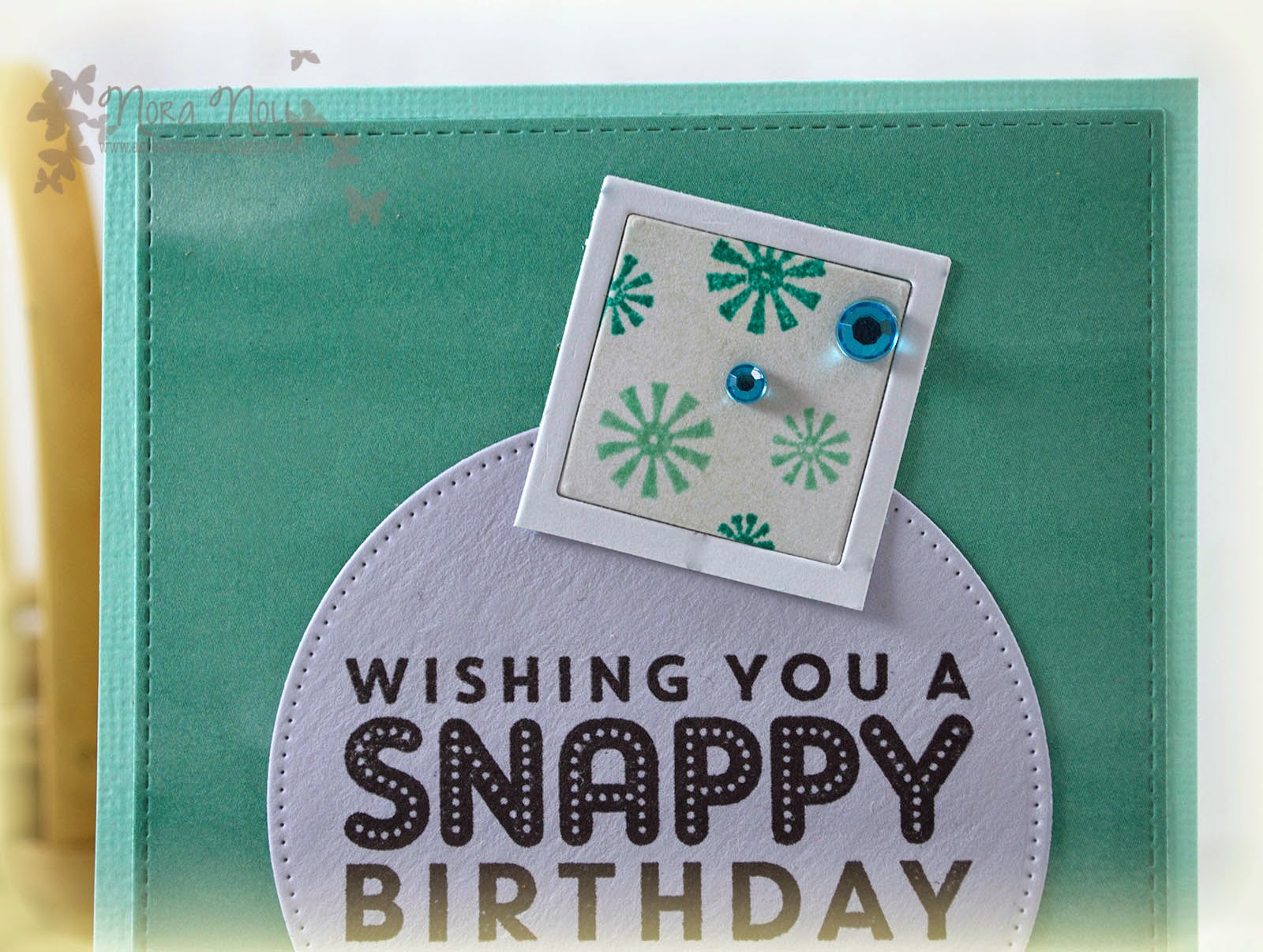 I inked the stamped square up with stone ink and adhered bot the frame and center onto the card. I then added some blue bling and it was done. So simple but I think so effective!! 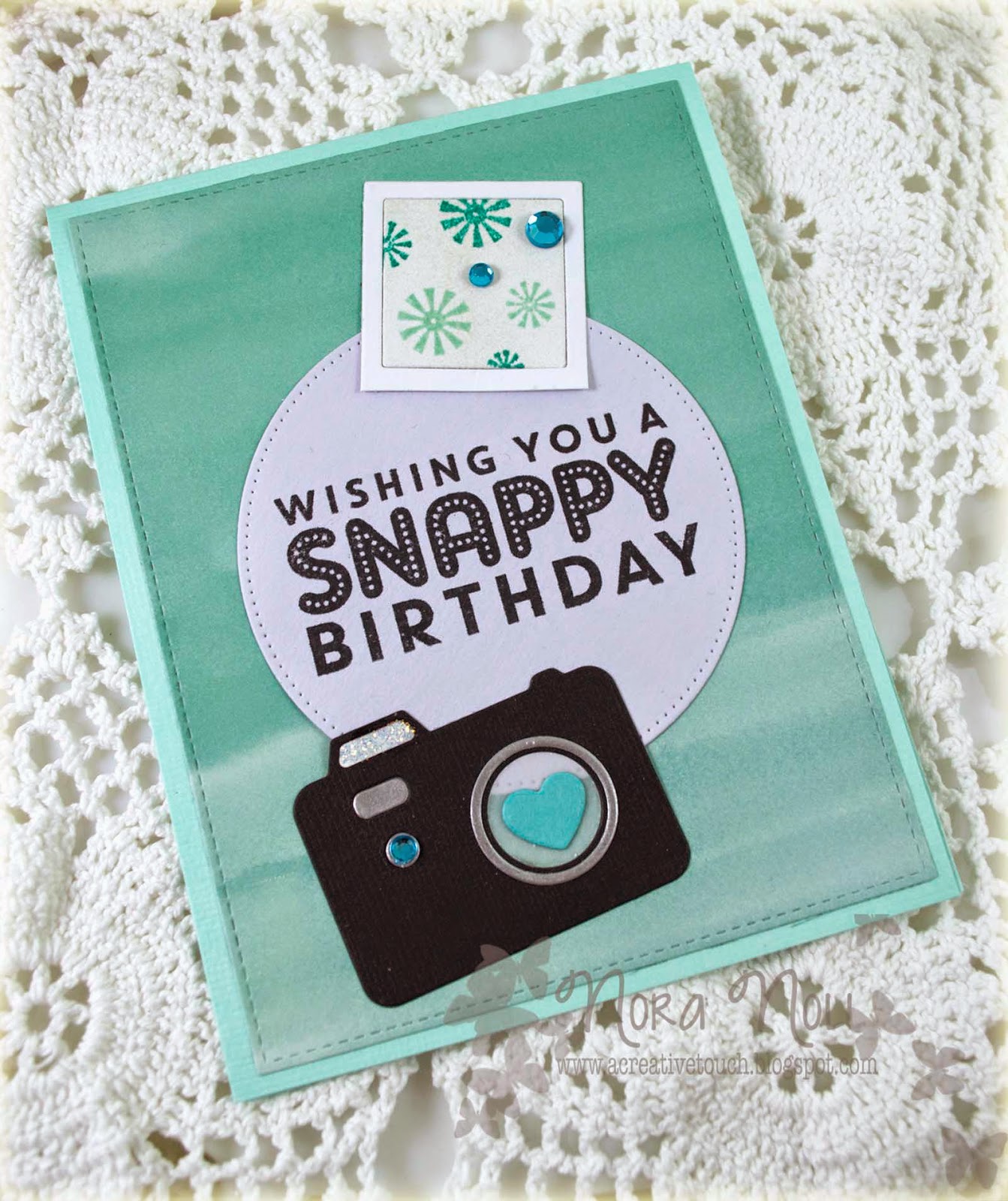 I wanted to use my Soufflé pen to add some color in the word "snappy" but the darn things were dried out!! I attempted to put the one I wanted to use in hot water to try to loosen it up but it didn't work. If anyone has any suggestions, please let me know.

Thanks for stopping by!

Happy WCMD!! It is rainy here so I have been having fun at my desk doing some challenges for World Card Making day. I will post those later.

For this post, though, I wanted to show you a card that I created for Simon Says Stamp Wednesday Challenge blog. This week the challenge was to create a card with a "transport it" theme. Here is the card I made. 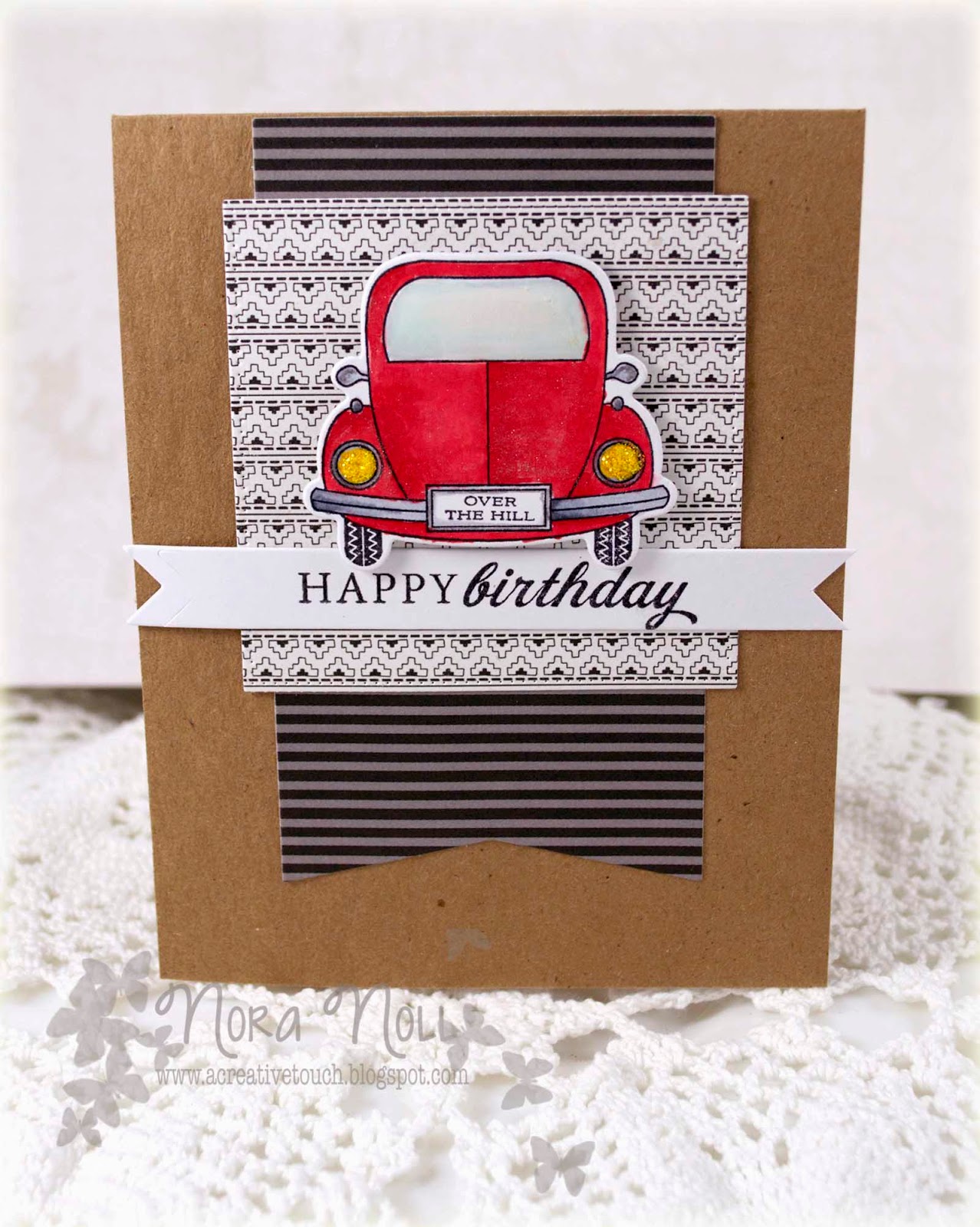 I used the "Enjoy the Ride" stamp set by Paper Trey Ink to stamp and die cut the car. I then practiced my Copic coloring for the class I am taking at Online Card Class site. So far I am learning some fabulous techniques. Some I am afraid to do, though, and have not practiced yet. One is creating backgrounds with Copic markers. I am just understanding blending groups, let alone creating a background with them!! This has been a fabulous class so far and I highly recommend it to anyone that wants to learn how to use these markers.

After I colored the car, I layered it over some die cuts that were cut from scraps. I used foam adhesive to give the car a bit of dimension. 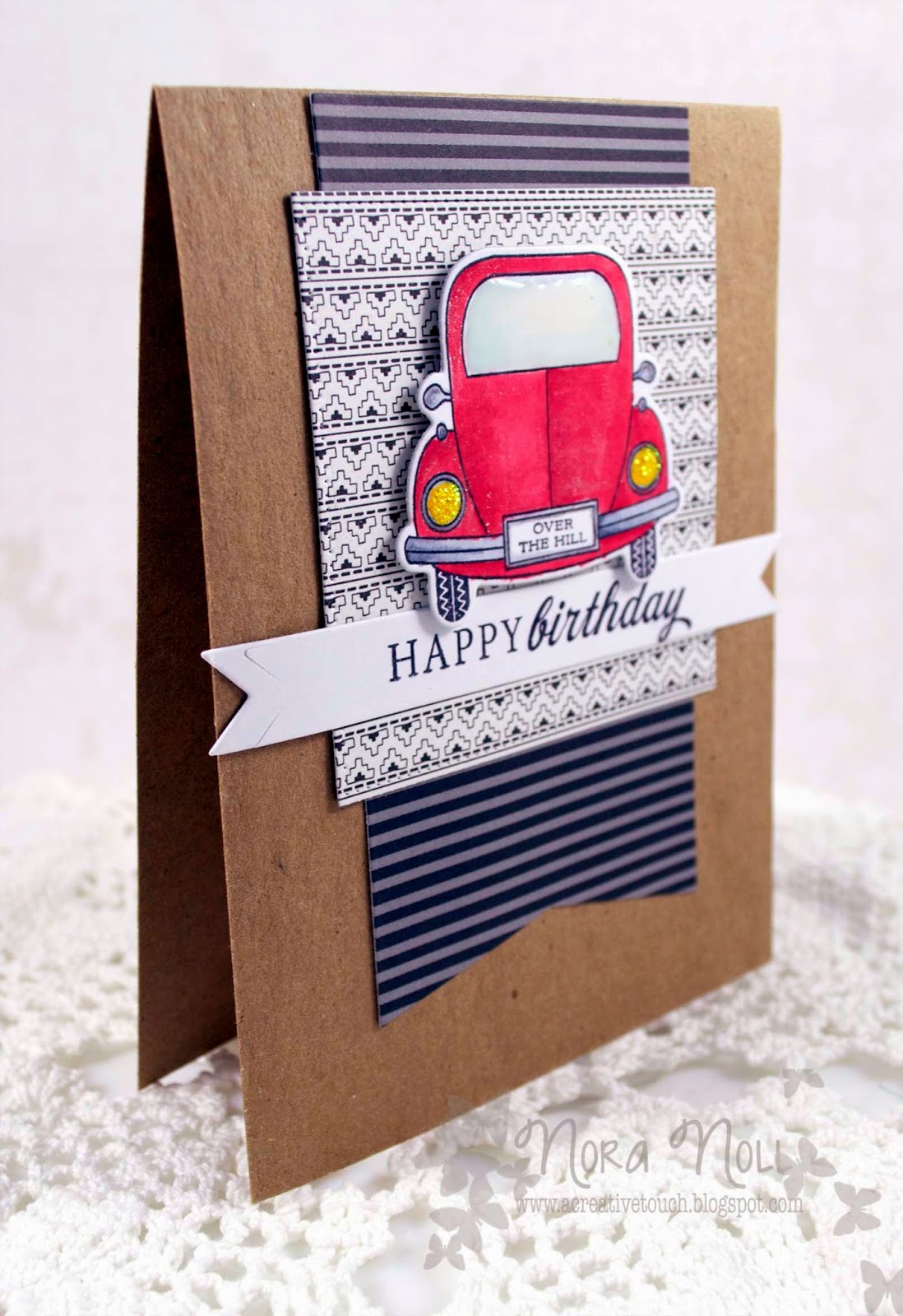 I also put a layer of glossy accents on the window, as well as some yellow Stickles on the headlights to give the car a little oomph. My last step was to go over the entire card with a Wink of Stella clear glitter pen. 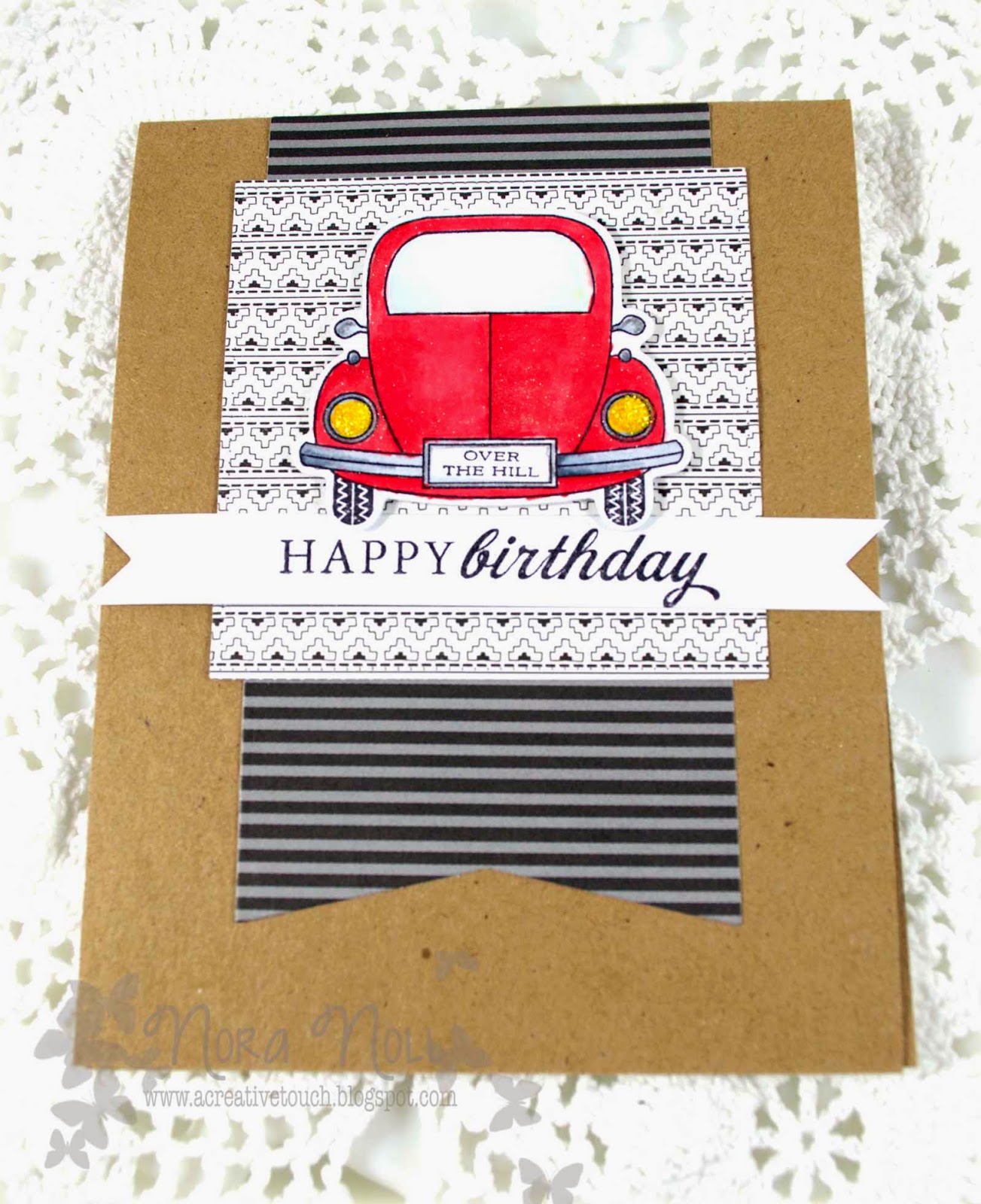 The design is rather simple but I love how it came out!! I tried to make the colors more masculine, though my husband does not think males drive beetles.

In other news, I thought I would share my Copic class practice sheet I colored for my white and red shading homework. 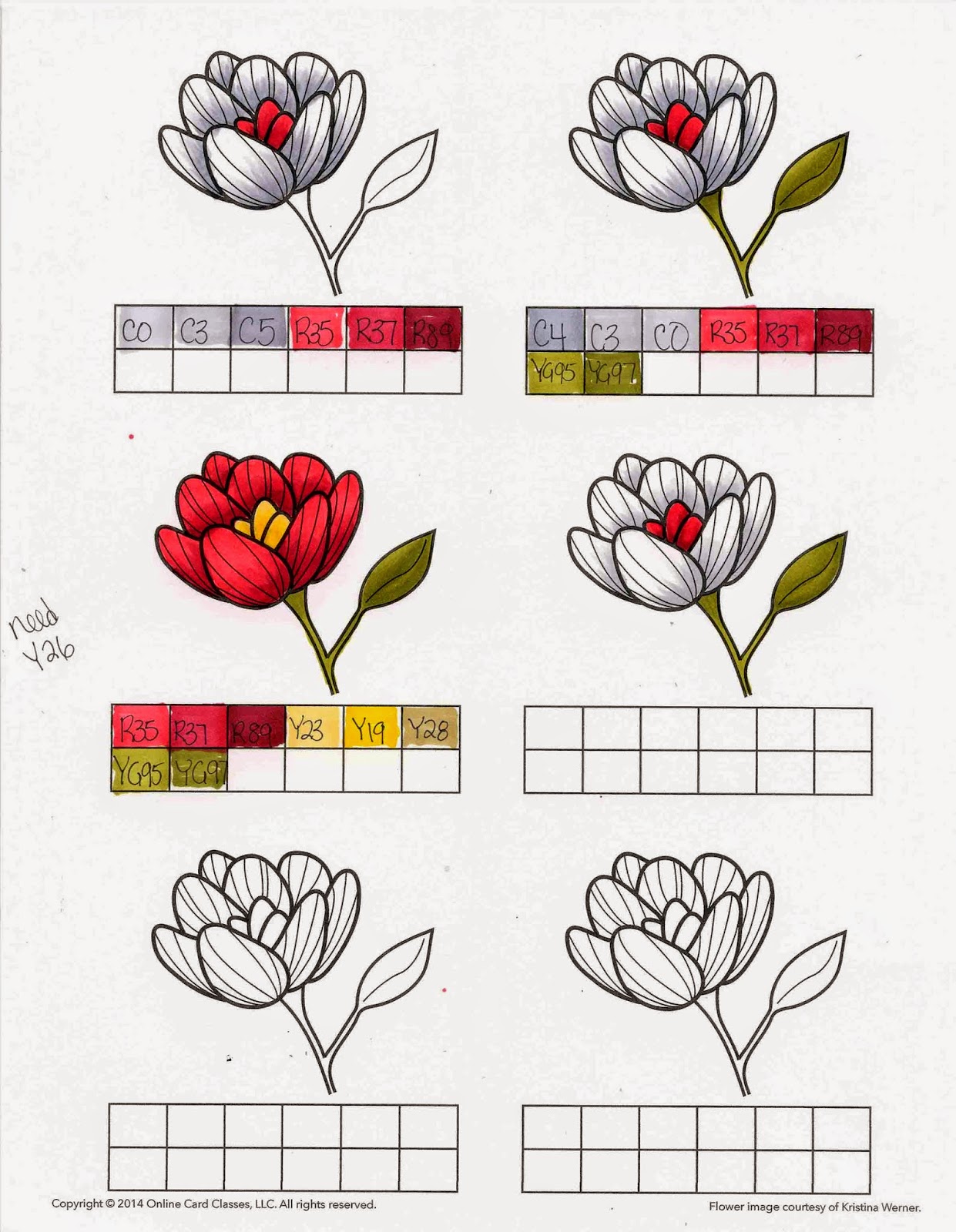 I did not use the red technique for my car, which I should have. I LOVE how that flower came out, though, don't you? The flower that I like the most for shading "white" is the fourth one. I did not put the colors I used in there for some reason but it was the lighter of the C's. I also used an extremely light touch. For once I did not go out of the lines!! I think I am finally getting used to the paper I copied the images on. It is different then what I usually use.

Again, I am entering the card above into Simon Says Stamp Wednesday challenge.

That is all for now. I will be posting again a little later with some other cards I created for World Card Making Day!! Thank you for stopping by!!