Happy Tuesday and my entry to PTI's "Make it Monday #173: No Outline Watercoloring"

It was a hot one here today-a good day to sit at my desk and make a card. I played along with Paper Trey Ink's "Make it Monday #173: No Outline Water coloring." My card was inspired by a costume from "The Paradise," a BBC show. I binged watch the first eight episodes on Netflix this past weekend as I rested my sprained ankle. I had caught an episode late at night during the winter via "Masterpiece Theatre" on PBS and had been searching for a place to watch more episodes. I noticed it was on Netflix and it was the perfect way to spend the time. I know the show was canceled in England after only two seasons because "Mr. Selfridge" was more popular, which is a shame. I have watched both shows and favored "The Paradise." The characters are more engaging and likable then the characters in "Mr. Selfridge."

Anyway, one thing I did notice were the costumes. I did not love the cuts nor was the authenticity accurate for those times but I did pull inspiration for my card from one of the main character, Denise's, dress. 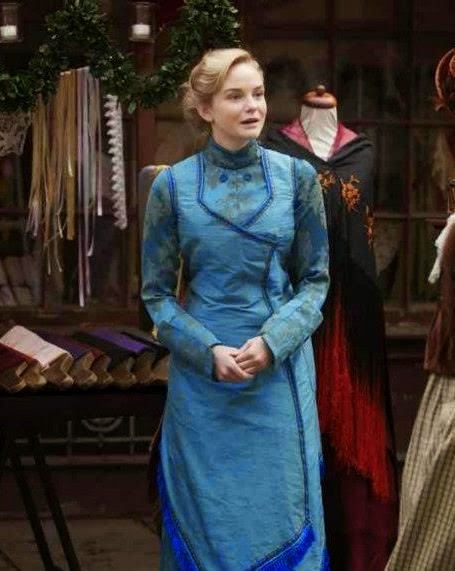 Rich colors like peacock blue, deep red, royal blue, and purples were used alone or paired with brighter colors like apple green, orange or sea green in the clothing of this period. These are my kind of colors!!

Here is the card I created: 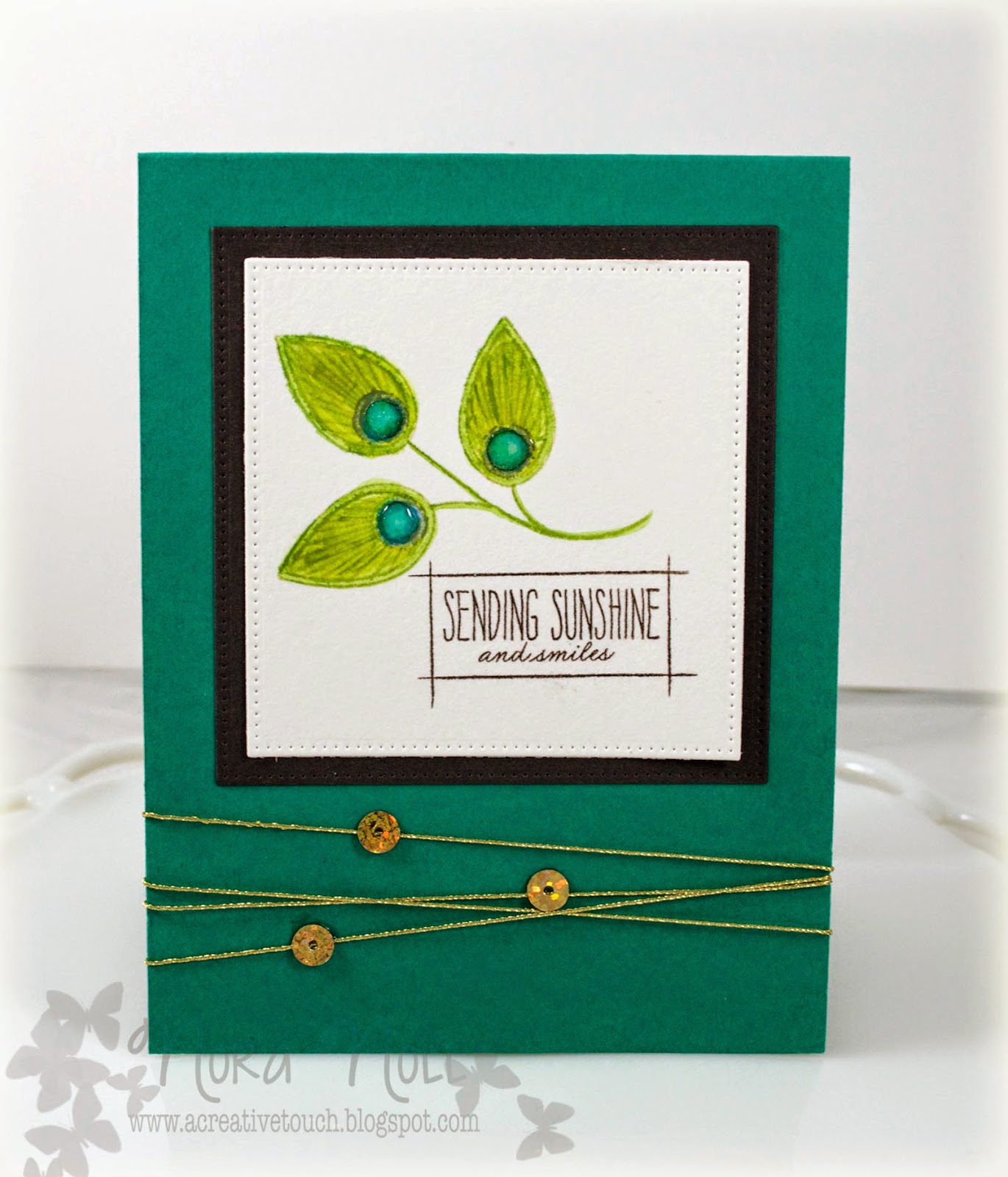 I am sure you are probably wondering how that dress inspired this card, since it is nothing like it. However, you cannot question how inspiration influences your creative flow and just go with it.

I chose to stamp a leaf cluster from Paper Trey Ink's "Doodlie-do" stamp set as my image to paint. This leaf reminded me of a peacock feather. I used a plethora of Paper Trey Ink's dye re-inkers as the paint. I looked at a peacock feather close up to figure out what colors I wanted to create and then mixed the "watercolor" from there. I even added some gold perfect pearls to one of the paint mixes to give the leaves a little bit of sheen.

As for the technique itself, I found it difficult to do. In fact, it took me four times to get the image just the way I wanted it for the above card. Below are my "mistakes" that I wound up throwing away. 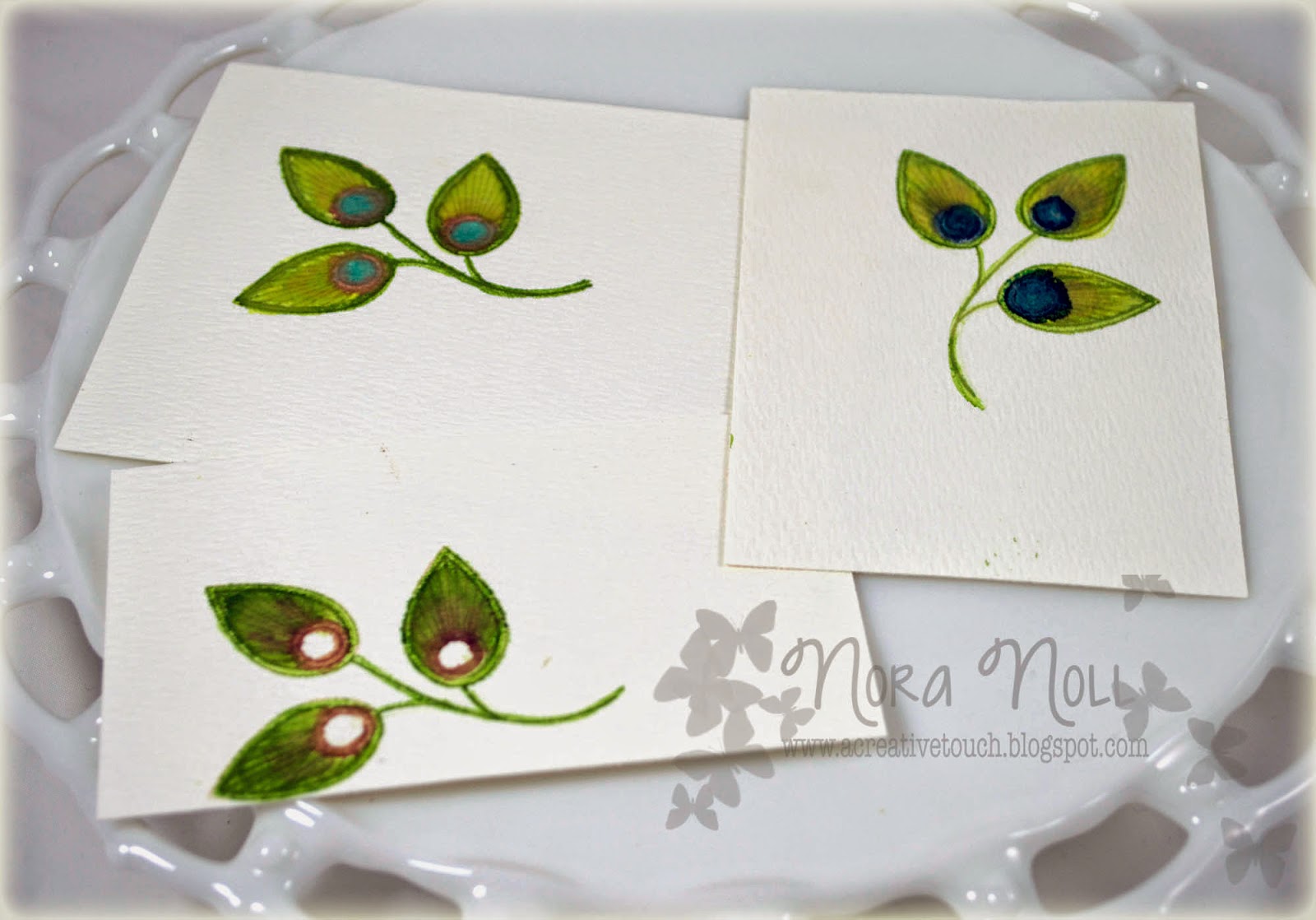 It not only took some time to get the coloring the way I wanted it but also there was a fine line for the image to be over water colored. I actually liked the lines in the image and needed to find a way to paint over them so they did not show but preserve them at the same time.

When I put together the card, I originally wanted it to be a full length piece. However, I dropped the panel and it picked up a speck of paint so I had to alter my design. 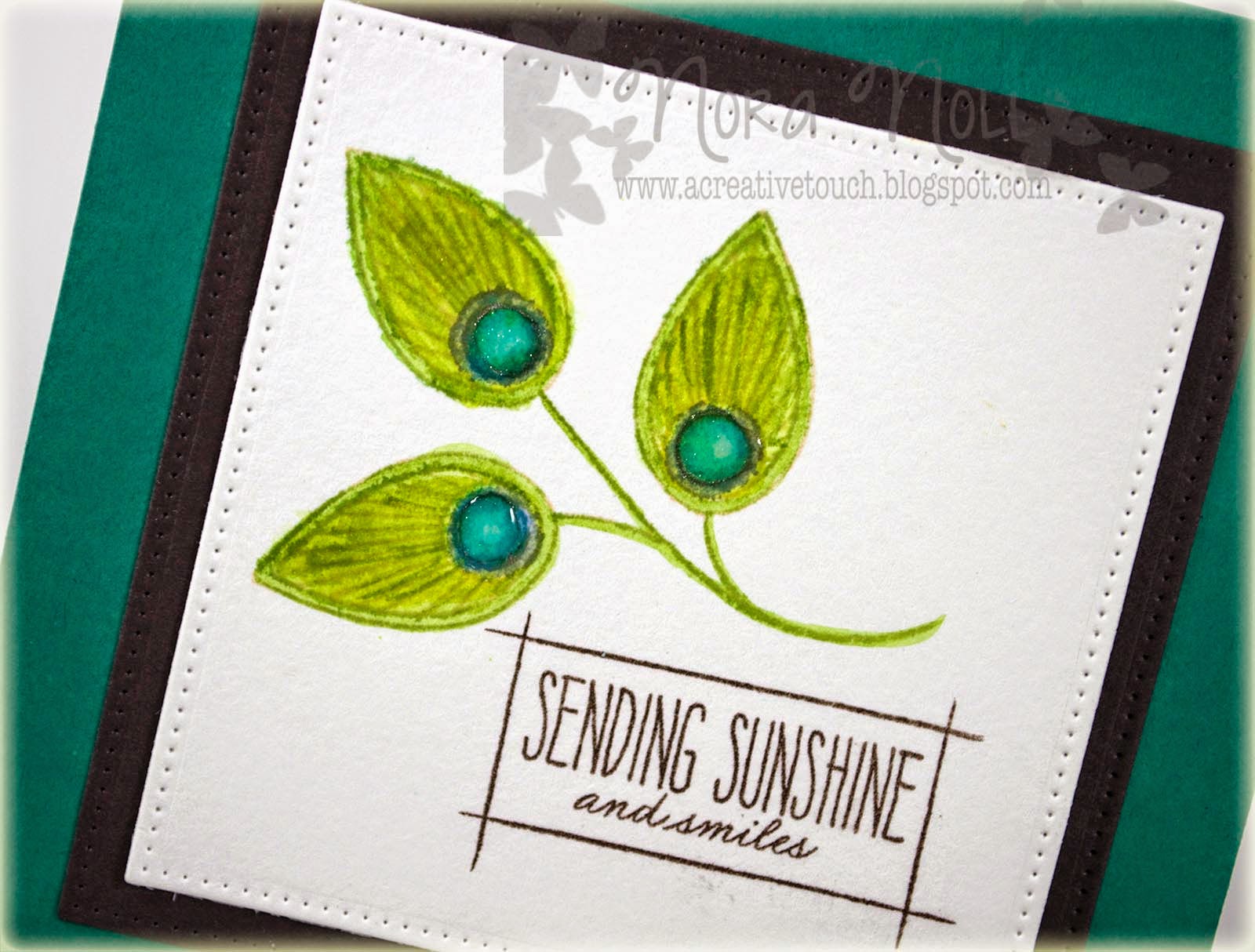 I used a Wink of Stella clear glitter pen to put a little bit of sparkle on the blue circles. I then used Glossy Accents over it. It is hard to see from the photo but they are shiny in real life.

On the bottom, I wrapped gold thread around a few times. I originally wanted to add some beads but re-thought that idea because I actually want to send this card out to someone. Instead, I adhered three gold sequins on top of the thread. 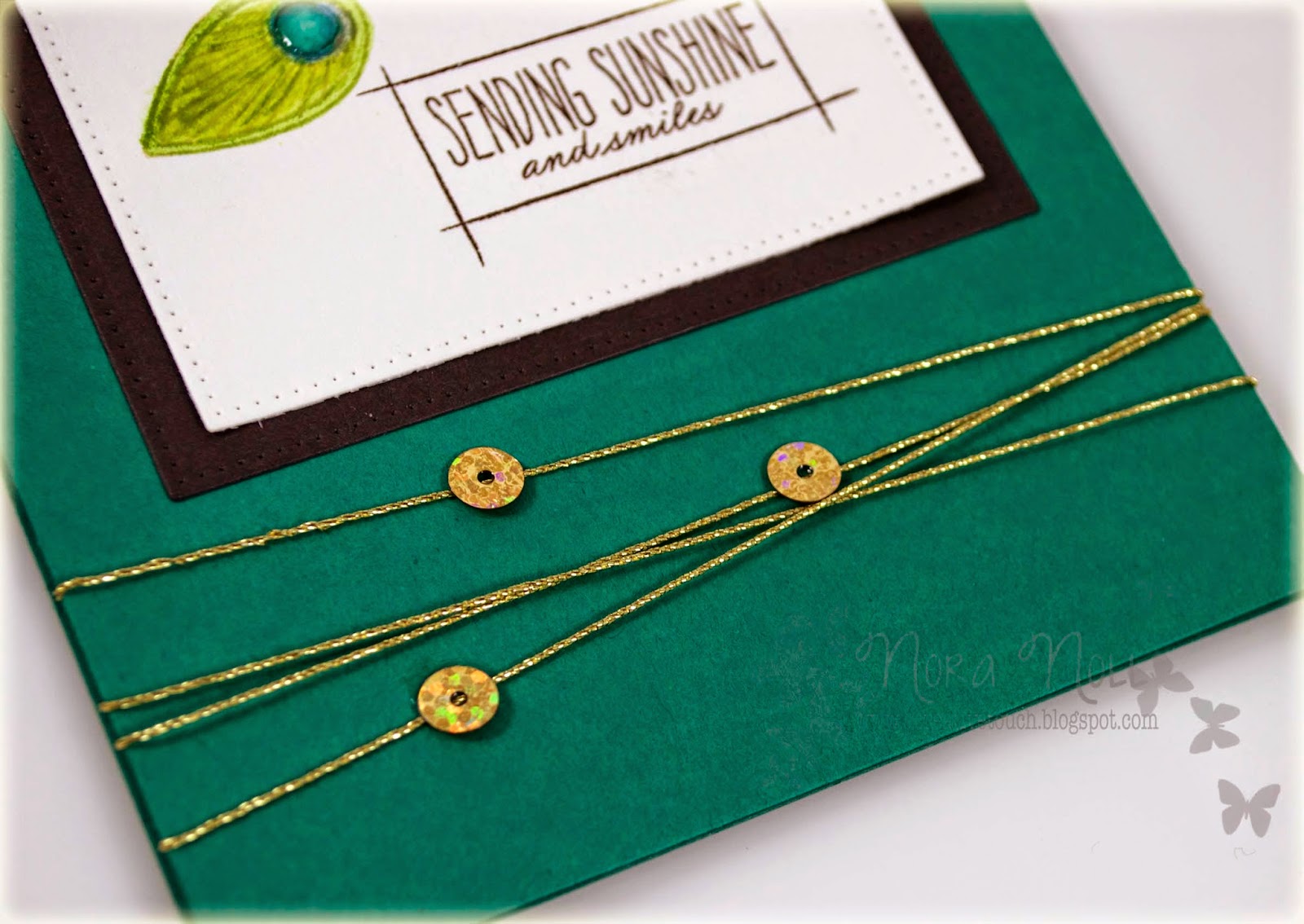 I am not sure if I would try this technique again. I like there to be some boundaries to what I am painting. I was never one to color outside the lines!! 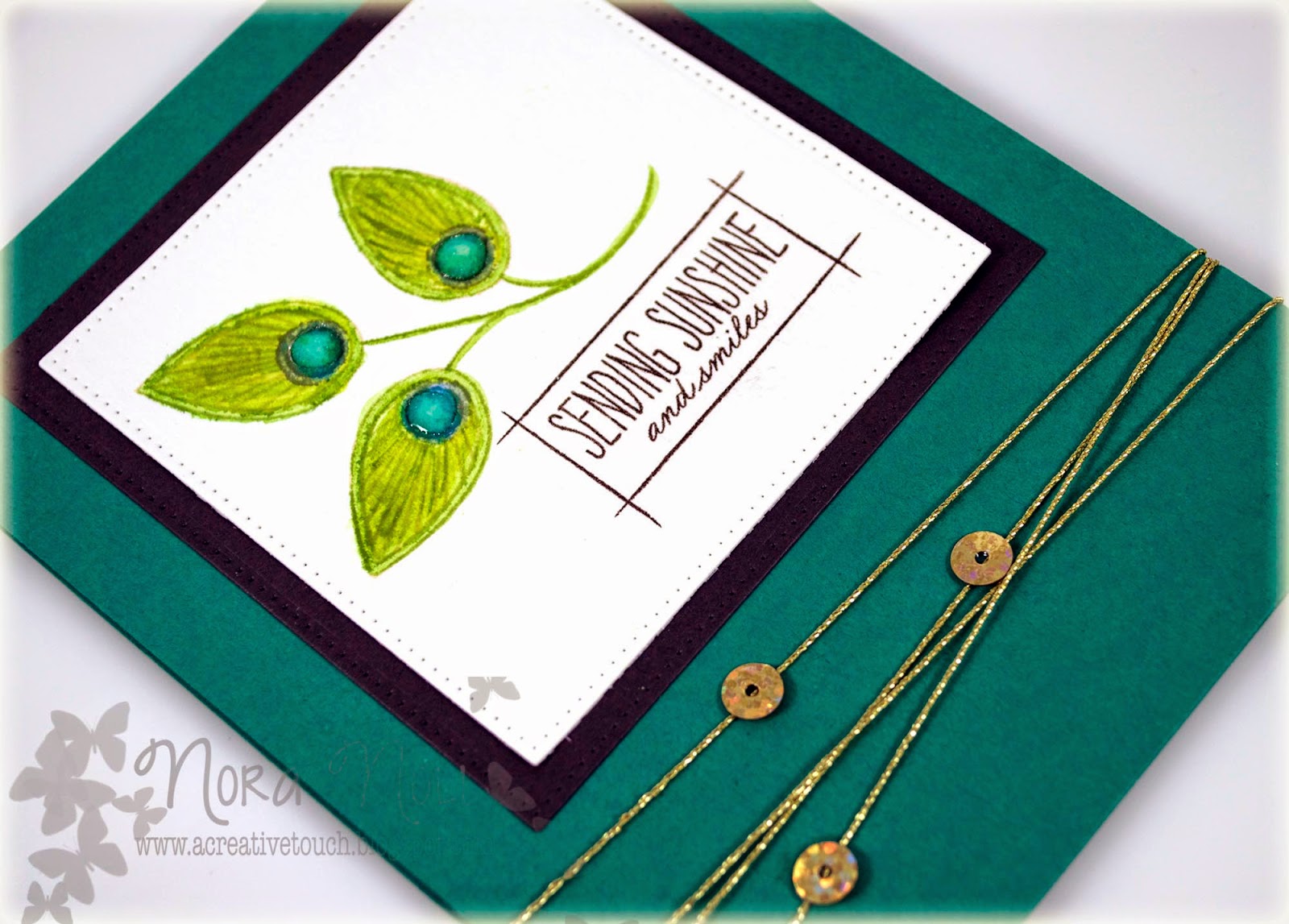 I appreciate you taking the time to stop by and visit. Have a great night!!